Smokejumper: A Memoir by One of America's Most Select Airborne Firefighters (Paperback) 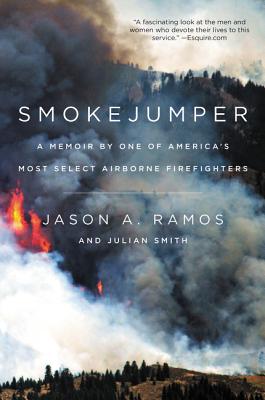 Smokejumper: A Memoir by One of America's Most Select Airborne Firefighters (Paperback)

By Jason A. Ramos, Julian Smith

"A fascinating look" (Esquire) inside the world of smokejumpers, the airborne firefighters who parachute into the most remote and rugged areas of the United States, confronting the growing threat of nature’s blazes.

Forest and wildland fires are growing larger, more numerous, and deadlier every year — record drought conditions, decades of forestry mismanagement, and the increasing encroachment of residential housing into the wilderness have combined to create a powder keg that threatens millions of acres and thousands of lives every year. One select group of men and women are part of America's front-line defense: smokejumpers. The smokejumper program operates through both the U.S. Forest Service and the Bureau of Land Management. Though they are tremendously skilled and only highly experienced and able wildland firefighters are accepted into the training program, being a smokejumper remains an art that can only be learned on the job. Forest fires often behave in unpredictable ways: spreading almost instantaneously, shooting downhill behind a stiff tailwind, or even flowing like a liquid. In this extraordinarily rare memoir by an active-duty jumper, Jason Ramos takes readers into his exhilarating and dangerous world, explores smokejumping’s remarkable history, and explains why their services are more essential than ever before.

Jason A. Ramos has devoted twenty-six years of his life to the fire service. His career began at the age of 17 as a volunteer with the Riverside County Fire Department, then progressed to wildland firefighting in Southern California. Now a smokejumper in his sixteenth season, he is based in Winthrop, WA, at the North Cascades Smokejumper Base, the "birthplace of smokejumping."

JULIAN SMITH received a Banff Mountain Book Award and a Lowell Thomas Travel Journalism Award for Crossing the Heart of Africa: An Odyssey of Love and Adventure. The coauthor of Smokejumper: A Memoir by One of America's Most Select Airborne Firefighters, he has written for Smithsonian, National Geographic Traveler, Wired, Outside, and the Washington Post, among other publications. Julian lives in Portland, Oregon.

“A fascinating look at the men and women who devote their lives to this service.” — Esquire.com

“[A] touching and fast-paced memoir... written with precision and perspective, sometimes with a touch of poetry. ... A fun and valuable read for anyone seeking to learn more about those who are willing to risk their lives to battle such deadly infernos.” — Washington Post

“You think your job’s hard? Jason Ramos and his colleagues parachute into the wilderness in order to save nature from going up in flames. He takes readers into the world of smokejumping, which has become more important as drought in America becomes more widespread.” — MensJournal.com, a ”Best Books of the Month” selection

“Jason Ramos weaves personal experiences, smokejumper history, fire science, and fire operations into a fascinating book. It is a must read for all firefighters as well as any American who lives or recreates in or near wildfire prone areas.” — Larry Lufkin, son of Francis Lufkin, Smokejumper NCSB '40, '46, '48-'50, MSO '42-44

“Nothing can ever measure up to the sound of engines roaring as you step out into the cold air, into harm’s way--to the smell of smoke and the endless beauty of the western mountains of America. Jason Ramos brings all that alive in this book.” — Bill Furman, CEO, Greenbrier Companies, Inc., Smokejumper NCSB '62-'67

“Interwoven with his exciting adventures on fires throughout the west, Jason educates the reader about the art of firefighting, the smokejumper culture, and the human tragedies associated with his 26-year firefighting career.” — Bill Moody, NCSB Jumper & Base Manager (retired) 1957-89, currently seasonal Air Tactical Group Supervisor and Aerial Fire Suppression Consultant

“Jason Ramos tells of nature at its most savage, of 2,000-degree heat and hurricane-force drafts, of heroic, sometimes lethal efforts to save the lives of people less prepared. Here you’ll meet the people who fly between Heaven and Hell. And jump.” — Wayne van Zwoll, PhD, former Special Projects Editor, Intermedia Outdoors

“Fast-paced. ... Ramos is an expert guide through a fearful world. ... His passion is unmistakable.” — USA Today

“Ramos chronicles the history of the elite group of airborne firefighters who attack blazes in some of the West’s most remote and rugged country. ... Ramos’ narrative will surely spark hearty debate.” — High Country News