Far from the Tree (Paperback) 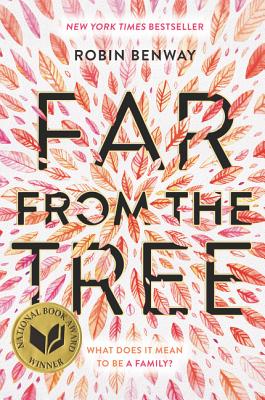 Far from the Tree (Paperback)

Perfect for fans of This Is Us, Robin Benway’s beautiful interweaving story of three very different teenagers connected by blood explores the meaning of family in all its forms—how to find it, how to keep it, and how to love it.

Being the middle child has its ups and downs.

But for Grace, an only child who was adopted at birth, discovering that she is a middle child is a different ride altogether. After putting her own baby up for adoption, she goes looking for her biological family, including—

Maya, her loudmouthed younger bio sister, who has a lot to say about their newfound family ties. Having grown up the snarky brunette in a house full of chipper redheads, she’s quick to search for traces of herself among these not-quite-strangers. And when her adopted family’s long-buried problems begin to explode to the surface, Maya can’t help but wonder where exactly it is that she belongs.

And Joaquin, their stoic older bio brother, who has no interest in bonding over their shared biological mother. After seventeen years in the foster care system, he’s learned that there are no heroes, and secrets and fears are best kept close to the vest, where they can’t hurt anyone but him.

Robin Benway is a National Book Award-winning and New York Times-bestselling author of six novels for young adults, including Audrey, Wait!, the AKA series, and Emmy & Oliver. Her books have received numerous awards and recognition, including the PEN America Literary Award, the Blue Ribbon Award from the Bulletin for the Center of Children's Books, ALA’s Best Books for Young Adults, and ALA’s Popular Paperbacks for Young Adults. In addition, her novels have received starred reviews from Kirkus, Booklist, and Publishers Weekly and have been published in more than twenty countries. Her book Far from the Tree won the 2017 National Book Award for Young People's Literature and the 2018 PEN America Award and was named one of the best books of the year by the New York Times, the Los Angeles Times, NPR, PBS, Entertainment Weekly, and the Boston Globe.

Robin grew up in Orange County, California, attended NYU, where she was the 1997 recipient of the Seth Barkas Prize for Creative Writing, and is a graduate of UCLA. She currently lives in Los Angeles.

★ “Family issues are neither airbrushed nor oversimplified. From the first page to the last, this compassionate, funny, moving, compulsively readable novel about what makes a family gets it right.”
— Kirkus Reviews (starred review)

“A sensitive exploration of what it means to be a family…With an abundance of warmth and humor, the novel continues to circle back to the message that love doesn’t require perfection — that perhaps it reveals itself most fully when we don’t quite get it right, but keep trying.”
— Chicago Tribune

★ “Equally heartwarming and heart-wrenching... Benway (Emmy & Oliver) delves into the souls of these characters as they wrestle to overcome feelings of inadequacy, abandonment, and betrayal, gradually coming to understand themselves and each other.”
— Publishers Weekly (starred review)

“Benway adeptly leads readers through a tale of love, loss, and self-discovery. Expect to cry real tears at this one.”
— School Library Journal

“Far from the Tree is the kind of book that strikes close to a reader’s heart. I had to know what happened to Grace, Maya, and Joaquin, and I couldn’t turn the pages fast enough. Beautiful.”
— Ally Condie, #1 New York Times Bestselling Author of the Matched trilogy

“Far from the Tree is a touching story about the strength and love of unconventional families, and the unbreakable bond of siblings near and far. Robin Benway’s characters are authentically crafted, full of heart, hurt, and hope.”
— Brandy Colbert, author of Pointe and Little & Lion

“A beautifully written story about the families we’re born with and the families we choose, as well as the power — and potential pain — of that choice.”
— Bustle

“A deeply moving novel...The trials the three teens face are always confronted directly and never diminished; their relationships, both new and old, are complicated and beautiful.”
— Shelf Awareness

“Far from the Tree dives deep into themes of heartbreak and love, and presents a profound, emotional meditation on what it means to be family.”
— Brightly

“If you’ve even once wept at NBC’s This Is Us, you particularly owe it to yourself to pick this one up.”
— NPR.org

“The book really is something special.”
— Wall Street Journal

“Readers will appreciate the explorations of family, stigma, and vulnerability. Benway is looking to follow in the Caroline Cooney footsteps of smart, realism-grounded stories.”
— Bulletin of the Center for Children’s Books