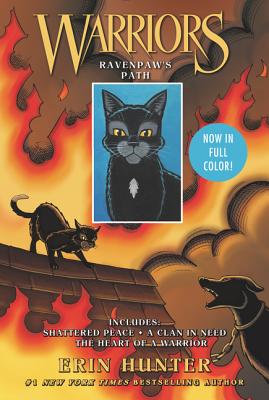 A full-color collection of three graphic novel adventures from the world of Erin Hunter’s Warriors series—never before available in color!

This epic volume includes all three books in the Ravenpaw’s Path graphic novel trilogy: Shattered Peace, A Clan in Need, and The Heart of a Warrior.

Set after the events of the first Warriors series, The Prophecies Begin, this graphic novel adventure follows Firestar’s friend and former Clanmate Ravenpaw as he fights to protect his new home.

Ravenpaw is no longer a warrior—but when a vicious group of rogue cats arrives at the barn where he now lives with his friend Barley, his peaceful new life is under threat. He must turn to his old friends in ThunderClan for help…and find the courage to fight like a warrior once more.

Erin Hunter is inspired by a love of cats and a fascination with the ferocity of the natural world. In addition to having great respect for nature in all its forms, Erin enjoys creating rich mythical explanations for animal behavior. She is the author of the Warriors, Seekers, Survivors, Bravelands, and Bamboo Kingdom series. Erin lives in the UK.