N-4 Down: The Hunt for the Arctic Airship Italia (Paperback) 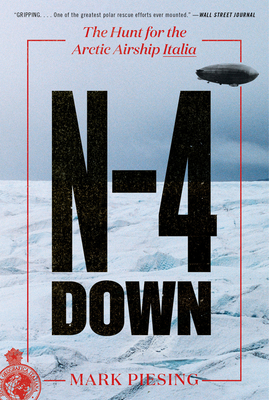 N-4 Down: The Hunt for the Arctic Airship Italia (Paperback)

"GRIPPING. ... One of the greatest polar rescue efforts ever mounted." —Wall Street Journal

The riveting true story of the largest polar rescue mission in history: the desperate race to find the survivors of the glamorous Arctic airship Italia, which crashed near the North Pole in 1928.

Triumphantly returning from the North Pole on May 24, 1928, the world-famous exploring airship Italia—code-named N-4—was struck by a terrible storm and crashed somewhere over the Arctic ice, triggering the largest polar rescue mission in history. Helping lead the search was Roald Amundsen, the poles’ greatest explorer, who himself soon went missing in the frozen wastes. Amundsen’s body has never been found, the last victim of one of the Arctic’s most enduring mysteries . . .

During the Roaring Twenties, zeppelin travel embodied the exuberant spirit of the age. Germany’s luxurious Graf Zeppelin would run passenger service from Germany to Brazil; Britain’s Imperial Airship was launched to connect an empire; in America, the iconic spire of the rising Empire State Building was designed as a docking tower for airships.

But the novel mode of transport offered something else, too: a new frontier of exploration. Whereas previous Arctic and Antarctic explorers had subjected themselves to horrific—often deadly—conditions in their attempts to reach uncharted lands, airships held out the possibility of speedily soaring over the hazards. In 1926, the famed Norwegian explorer Roald Amundsen—the first man to reach the South Pole—partnered with the Italian airship designer General Umberto Nobile to pioneer flight over the North Pole. As Mark Piesing uncovers in this masterful account, while that mission was thought of as a great success, it was in fact riddled with near disasters and political pitfalls.

In May 1928, his relationship with Amundsen corroded beyond the point of collaboration, Nobile, his dog, and a crew of fourteen Italians, one Swede, and one Czech, set off on their own in the airship Italia to discover new lands in the Arctic Circle and to become the first airship to land men on the pole. But near the North Pole they hit a terrible storm and crashed onto the ice. Six crew members were never seen again; the injured (including Nobile) took refuge on ice flows,unprepared for the wretched conditions and with little hope for survival.

Coincidentally, in Oslo a gathering of famous Arctic explorers had assembled for a celebration of the first successful flight from Alaska to Norway. Hearing of the accident, Amundsen set off on his own desperate attempt to find Nobile and his men. As the weeks passed and the largest international polar rescue expedition mobilized, the survivors engaged in a last-ditch struggle against weather, polar bears, and despair. When they were spotted at last, the search plane landed—but the pilot announced that there was room for only one passenger. . . .

Braiding together the gripping accounts of the survivors and their heroic rescuers, N-4 Down tells the unforgettable true story of what happened when the glamour and restless daring of the zeppelin age collided with the harsh reality of earth’s extremes.

Mark Piesing writes for the Guardian, FT, Economist and Wired, among other publications. He lives in Oxford, England. This is his first book.

"One of the greatest polar rescue efforts ever mounted, a saga that journalist Mark Piesing retells in N-4 Down. ... Gripping. ... This is a book with much to enjoy and a good illustration of what human curiosity, determination and courage—and sometimes a healthy dollop of vanity—can achieve." — Wall Street Journal

"In compelling prose, Piesing draws us into the feverish efforts to conquer the Arctic by air. ... Refreshingly well-written. ... Piesing deserves credit for bringing this forgotten bit of aerospace history back to light." — Forbes

"Mark Piesing evocatively brings to life a lesser-known tale in the ill-fated history of polar exploration. Like the stories of Franklin and Shackleton, it combines triumph, disaster, heroism, hubris and mystery—but unlike them it features dashing aviators in airships and seaplanes. It is an epic tale that deserves to be far more widely known." — Tom Standage, New York Times bestselling author of A History of The World in 6 Glasses

"A meticulously researched and utterly gripping account of adventure, airships and adversity, Mark Piesing's N-4 Down is a brilliant book. Packed with a cast of vivid characters, magnificent flying machines, political machinations and tales of survival against all imaginable odds, it depicts one of the most extraordinary stories of not just aviation and exploration, but the twentieth century as a whole. You will never forget General Nobile, the airship and the endless ice they faced." — Michael Bhaskar, author of Human Frontiers: The Future of Big Ideas in an Age of Small Thinking

“N-4 Down is a gripping, detailed tale of exploration, betrayal and rescue. Mark Piesing has crafted a fascinating recounting of a liminal time when flying and polar expeditions were equally risky, so of course people tried to combine them. Think The Terror, but with airships.” — Charles Arthur, author of Social Warming and Digital Wars, former technology editor at The Guardian

"A gripping telling of the story of the crash of N-4 Italia and the deadly attempt at rescue.. ... N-4 Down is an engrossing read." — New York Journal of Books

"One of the joys of reading accounts of events a century ago is that authors gain access to letters, diaries, journals and other handwritten material that provide so much texture to narratives. Consequently, the stories are rich in detail. Piesing provides great context about the aviation era. ... A fine book." — Fredericksburg Free Lance-Star

“Takes readers on a thrilling, nail-biting adventure of the largest arctic rescue operation in history as famed Norwegian explorer, Roald Amundsen, rushed to save the surviving crew of the airship Italia, which crashed during its attempt to land men at the North Pole in 1928. The history and aeronautical buffs on your holiday shopping list are going to absolutely love it.” — Engadget

“The author has visited the places about which he writes, and his sketches of remote locales make for interesting reading. He also offers useful insights on the strange blend of competition and cooperation that characterized Arctic exploration. … Of interest to would-be Arctic explorers and armchair adventurers.”  — Kirkus Reviews

“N-4 Down is the work of a real writer, who can create a difficult balance among facts, characters and history coming from so many sources, also daring 'to nose' into situations of which he tries to see what is behind and beyond appearances. Besides, the book is the testimony that the true hero’s feats never have an end, especially in our times where we rarely witness such examples." — Antonio Ventre, Director of Umberto Nobile Museum