Fourth Uncle in the Mountain: A Memoir of a Barefoot Doctor in Vietnam (Hardcover) 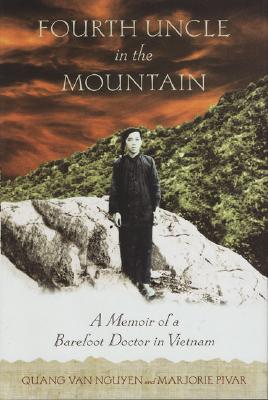 Fourth Uncle in the Mountain: A Memoir of a Barefoot Doctor in Vietnam (Hardcover)

Set during the French and American wars, Fourth Uncle in the Mountain is a true story about an orphan, Quang Van Nguyen, who is adopted by a sixty-four year old monk, Thau, who carries great responsibility for his people as a barefoot doctor. Thau manages, against all odds to raise his son to follow in his footsteps and in doing so, saves his son, as well as a part of Vietnam's esoteric knowledge from the Vietnam holocaust.

Thau is wanted by the French regime, and occasionally must flee into the jungle, where he is perfectly at home living among the animals. Thau is not the average monk; he practices an ancient lineage of Chinese medicine and uses magic to protect animals and help people.

As wise and resourceful as Thau is, he meets his match in his mischievous son. Quang is more interested in learning Cambodian sorcery and martial arts than in developing his skills and wisdom according to his father's plan.

Fourth Uncle in the Mountain is an odyssey of a single-father folk hero and his foundling son in a land ravaged by the atrocities of war. It is a classic story, complete with humor, tragedy, and insight from a country where ghosts and magic are real.

Quang Van Nguyen is the son of one of South Vietnam's most beloved spiritual leaders, Thau Van Nguyen. Quang became a Buddhist abbot before fleeing Vietnam in 1986. He now lives and practices traditional medicine in the United States.

Marjorie Pivar has worked for the past twenty years as a Shiatsu therapist in the field of alternative medicine. She lives in Vermont.