Sweet Mandarin: The Courageous True Story of Three Generations of Chinese Women and Their Journey from East to West (Paperback) 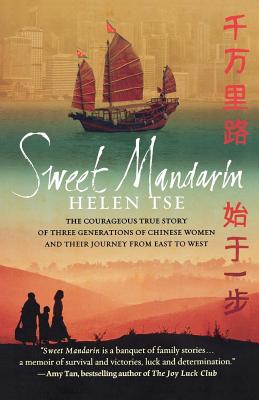 Sweet Mandarin: The Courageous True Story of Three Generations of Chinese Women and Their Journey from East to West (Paperback)

Spanning almost a hundred years, this rich and evocative memoir recounts the lives of three generations of remarkable Chinese women.

Their extraordinary journey takes us from the brutal poverty of village life in mainland China, to newly prosperous 1930s Hong Kong and finally to the UK. Their lives were as dramatic as the times they lived through.

A love of food and a talent for cooking pulled each generation through the most devastating of upheavals. Helen Tse's grandmother, Lily Kwok, was forced to work as an amah after the violent murder of her father. Crossing the ocean from Hong Kong in the 1950s, Lily honed her famous chicken curry recipe. Eventually she opened one of Manchester's earliest Chinese restaurants where her daughter, Mabel, worked from the tender age of nine. But gambling and the Triads were pervasive in the Chinese immigrant community, and tragically they lost the restaurant. It was up to author Helen and her sisters, the third generation of these exceptional women, to re-establish their grandmother's dream. The legacy lived on when the sisters opened their award-winning restaurant Sweet Mandarin in 2004.

Sweet Mandarin shows how the most important inheritance is wisdom, and how recipes--passed down the female line--can be the most valuable heirloom.

This paperback edition includes discussion questions and recipes for dishes featured in the Sweet Mandarin restaurant.

HELEN TSE grew up in Manchester, UK. She studied law at Cambridge University and went on to work as a finance lawyer in London, Hong Kong, and Manchester. She opened the restaurant Sweet Mandarin with her two sisters, Lisa and Janet, in 2004, following the culinary footsteps of her mother and grandmother. Helen Tse is the first British born Chinese author and SWEET MANDARIN is her debut.
“Sweet Mandarin is a banquet of family stories… a memoir of survival and victories, luck and determination.” —Amy Tan, bestselling author of The Joy Luck Club