A Trick of the Light: A Chief Inspector Gamache Novel (Hardcover) 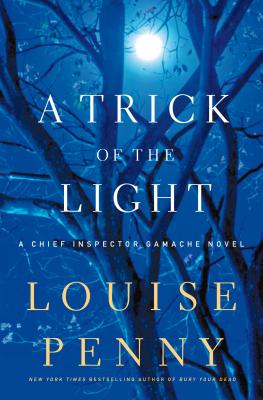 A Trick of the Light: A Chief Inspector Gamache Novel (Hardcover)

This is book number 7 in the Chief Inspector Gamache Novel series.

“I love character-driven suspense novels with a strong sense of place, and Penny's series featuring Chief Inspector Armand Gamache and set in the magical world of Three Pines, Quebec, fits that bill. In A Trick of the Light, artist Clara Morrow's celebration of her first major exhibition in Montreal is followed by the discovery of a murdered woman's body in her garden. The subtle shadings of Penny's characters and the twists of the plot make this tale a work of art in its own right. Highly recommended!”
— Carol Schneck, Schuler Books & Music, Okemos, MI

With A Trick of the Light, Louise Penny takes us back to the deceptively peaceful village of Three Pines in this brilliant novel in her award-winning, New York Times bestselling series featuring Chief Inspector Armand Gamache.

But now Lillian herself is dead. Found among the bleeding hearts and lilacs of Clara Morrow's garden in Three Pines, shattering the celebrations of Clara's solo show at the famed Musée in Montreal. Chief Inspector Gamache, the head of homicide at the Sûreté du Québec, is called to the tiny Quebec village and there he finds the art world gathered, and with it a world of shading and nuance, a world of shadow and light. Where nothing is as it seems. Behind every smile there lurks a sneer. Inside every sweet relationship there hides a broken heart.
And even when facts are slowly exposed, it is no longer clear to Gamache and his team if what they've found is the truth, or simply a trick of the light.

"Penny has been compared to Agatha Christie [but] it sells her short. Her characters are too rich, her grasp of nuance and human psychology too firm...." --Booklist (starred review)

LOUISE PENNY is the author of the #1 New York Times, USA Today, and Globe and Mail bestselling series of Chief Inspector Armand Gamache novels, and coauthor with Hillary Rodham Clinton of the #1 New York Times bestselling thriller State of Terror. She has won numerous awards, including a CWA Dagger and the Agatha Award (seven times), and was a finalist for the Edgar Award for Best Novel. In 2017, she received the Order of Canada for her contributions to Canadian culture. Louise lives in a small village south of Montréal.

“The superbly gifted Louise Penny is on my secret shortlist of must-read authors, and A TRICK OF THE LIGHT proves why. Artist Clara Morrow is about to have a prestigious show of her paintings when her childhood friend is found murdered, and the finger of suspicion points to Clara. Chief Inspector Gamache is called to investigate, and using his trademark powers of deduction and his intuitive knack for the right question at the right time, he exposes the darkness that underlies the bright stars of Montreal's art world, where competition between friends, and even between husband and wife, can turn lethal. Ultimately, of course, it's Louise Penny who steals the show, and A TRICK OF THE LIGHT will not only keep you engrossed from start to finish, it will teach you something new about love, truth, and the human heart.” —Lisa Scottoline

“Penny, elevating herself to the pantheon that houses P.D. James, Ruth Rendell and Minette Walters, demonstrates an exquisite touch with characterization, plotting and artistic sensitivity. And there could be no better explanation of A.A. than you will find here.” —Kirkus Reviews (starred review)

“Outstanding….With her usual subtle touch and timely injections of humor, Penny effectively employs the recurring motif of the chiaroscuro, the interplay of light and dark, which distinguishes Morrow's artwork and which resonates symbolically in the souls of the author's characters.” —Publishers Weekly (starred review)

“Like P. D. James, Penny shows how the tight structure of the classical mystery story can accommodate a wealth of deeply felt emotions and interpersonal drama."--Booklist"Penny's characters are sharply drawn, realistically complicated and heartbreakingly real. Wonderful, complex characters and sophisticated plotting makes this a perfect book. Do not miss it.” —RT Book Reviews

Additional Praise for Louise Penny and the Armand Gamache Mysteries

“Louise Penny is unsurpassed at building a sense of heart-stopping urgency." —The Charlotte Observer

“Penny, who raises the bar with each entry in this superb series, has always mixed murder and corruption with issues of morality...[S]he does so with her accustomed talent for a gripping plot, rich characterizations, arresting prose and thought-provoking questions of mercy, malice and the contradictions of the human race." —Richmond-Times Dispatch

“Penny writes with grace and intelligence about complex people struggling with complex emotions. But her great gift is her uncanny ability to describe what might seem indescribable – the play of light, the sound of celestial music, a quiet sense of peace.” —New York Times Book Review