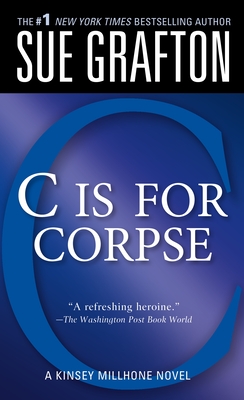 This is book number 3 in the Kinsey Millhone Alphabet Mysteries series.

C IS FOR CALCULATED

How do you go about solving an attempted murder when the victim has lost a good part of his memory? It's one of Kinsey's toughest cases yet, but she never backs down from a challenge. Twenty-three-year-old Bobby Callahan is lucky to be alive after a car forced his Porsche over a bridge and into a canyon. The crash left Bobby with a clouded memory. But he can't shake the feeling it was no random accident and that he's still in danger…

C IS FOR CRIME

The only clues Kinsey has to go on are a little red address book and the name "Blackman." Bobby can't remember who he gave the address book to for safekeeping. And any chances of Bobby regaining his memory are dashed when he's killed in another automobile accident just three days after he hires Kinsey.

C IS FOR CORPSE

As Kinsey digs deeper into her investigation, she discovers Bobby had a secret worth killing for—and unearthing that secret could send Kinsey to her own early death…


“Smart, tough, and thorough…Kinsey Millhone is a pleasure.” —The Bloomsbury Review

“Kinsey is one of the most persuasive of the new female operatives…she's refreshingly free of gender clichés. Grafton, who is a very witty writer, has also given her sleuth a nice sense of humor--and a set of Wonder Woman sheets to prove it.” —Boston Herald