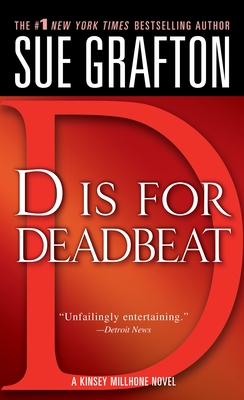 This is book number 4 in the Kinsey Millhone Alphabet Mysteries series.

D IS FOR DEADBEAT

When Alvin Limardo walks into P.I. Kinsey Millhone's office, she smells bad news. He wants Kinsey to deliver $25,000. The recipient: A fifteen-year-old boy. It's a simple matter. So simple that Kinsey wonders why he doesn't deliver the money himself. She's almost certain something is off. But with rent due, Kinsey accepts Limardo's retainer against her better judgment…

When Limardo's check bounces, Kinsey discovers she's been had big time. Alvin Limardo is really John Daggett—an ex-con with a drinking problem, two wives to boot, and a slew of people who would like to see him dead. Now Kinsey is out four hundred dollars and in hot pursuit of Daggett.

When Daggett's corpse shows up floating in the Santa Teresa surf, the cops rule the death an accident. Kinsey thinks it's murder. But seeking justice for a man who everyone seemed to despise is going to be a lot tougher than she bargained for—and what awaits her at the end of the road is much more disturbing than she could've ever imagined…

“One of the things that makes Sue Grafton's Kinsey Millhone series so unfailingly entertaining is Millhone's character. She's the last one to cultivate eccentricities in the Nero Wolfe manner, and her unsentimental, loner's-eye view of herself and the world keeps her feet on the ground. But her cases often get messy because she feels things strongly. This happens again, more satisfyingly than ever, in ‘D' is for Deadbeat.” —The Detroit News

“Kinsey Millhone has the characteristic persistence of the good private eye who won't be deterred from digging out the truth. With skill, Grafton keeps not only her appealing detective but her readers on the edge to know more.” —Ms. magazine