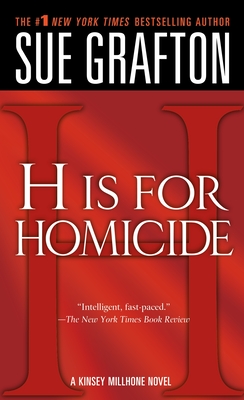 This is book number 8 in the Kinsey Millhone Alphabet Mysteries series.

H IS FOR HUSTLER…

When PI Kinsey Millhone's good friend and colleague Parnell Perkins is found murdered in the parking lot behind California Fidelity Insurance, she can't believe he had any enemies. The only clue that raises a red flag for Kinsey is one of Parnell's files on a Bibianna Diaz, who appears to have made a lucrative career out of scamming insurance companies with phony claims…

H IS FOR HAZARDOUS…

Taking an alias, Kinsey goes undercover to befriend Bibianna, hoping she'll get close enough to catch the con artist at her own game. But Kinsey never dreams that hanging out with Bibianna will get them both thrown in jail. And when they're released, Bibianna's very jealous, very dangerous ex-fiancé Raymond Maldonado is waiting for them.

H IS FOR HOMICIDE

Kinsey soon discovers the short-tempered thug is the kingpin behind Bibianna's and countless other phony insurance claims. But was Raymond also responsible for Parnell's death? All Kinsey knows is that she'll have to think quick to nab one of the most treacherous criminals she's come face to face with—and keep herself alive…

“Intelligent, fast-paced, and filled with memorable characters...Kinsey remains as engaging as ever.” —The New York Times Book Review