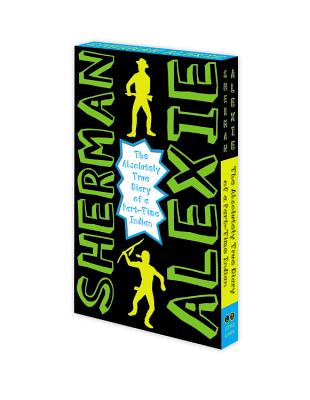 
Not currently available
The book that launched Sherman Alexie onto the YA market is now available in a deluxe collector's edition! Beautifully designed with a gifty new look that includes a foil-stamped, die-cut slipcase and 4-color interior art, this edition is perfect for fans and collectors alike.

In his nationally acclaimed, semi-autobiographical YA debut, author Sherman Alexie tells the heartbreaking, hilarious, and beautifully written story of a young Native American teen as he attempts to break free from the life he was destined to live.
A National Book Award-winning author, poet, and filmmaker, Sherman has been named one of Granta's Best Young American Novelists and has been lauded by The Boston Globe as "an important voice in American literature." He is one of the most well known and beloved literary writers of his generation, with works such as The Long Ranger and Tonto Fistfight in Heaven and Resevoir Blues and has received numerous awards and citations, including the PEN/Malamud Award for Fiction and the Lila Wallace-Reader's Digest Award.
"A Native American equivalent of Angela's Ashes."—(starred review), Publishers Weekly

"Sure to resonate and lift spirits of all ages for years to come."—USA Today

"This is a gem of a book....may be [Sherman Alexie's] best work yet."—New York Times