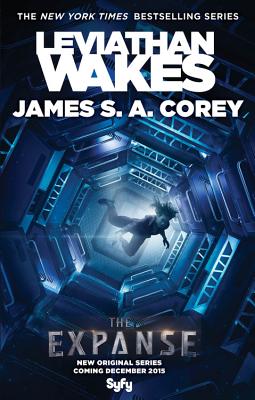 This is book number 1 in the The Expanse series.

Humanity has colonized the solar system -- Mars, the Moon, the Asteroid Belt and beyond -- but the stars are still out of our reach.

Jim Holden is XO of an ice miner making runs from the rings of Saturn to the mining stations of the Belt. When he and his crew stumble upon a derelict ship, the Scopuli, they find themselves in possession of a secret they never wanted. A secret that someone is willing to kill for -- and kill on a scale unfathomable to Jim and his crew. War is brewing in the system unless he can find out who left the ship and why.

Detective Miller is looking for a girl. One girl in a system of billions, but her parents have money and money talks. When the trail leads him to the Scopuli and rebel sympathizer Holden, he realizes that this girl may be the key to everything.

Holden and Miller must thread the needle between the Earth government, the Outer Planet revolutionaries, and secretive corporations -- and the odds are against them. But out in the Belt, the rules are different, and one small ship can change the fate of the universe.

"Interplanetary adventure the way it ought to be written." -- George R. R. Martin
James S.A. Corey is the pen name of fantasy author Daniel Abraham and Ty Franck. They both live in Albuquerque, New Mexico. Find out more about this series at www.the-expanse.com.
"The science fictional equivalent of A Song of Ice and Fire...only with fewer beheadings and way more spaceships."—NPR Books on Cibola Burn

"The Expanse series is the best space opera series running at full tilt right now, and Cibola Burn continues that streak of excellence."—io9 on Cibola Burn

"It's been too long since we've had a really kickass space opera. LEVIATHAN WAKES is interplanetary adventure the way it ought to be written, the kind of SF that made me fall in love with the genre way back when, seasoned with a dollop of horror and a dash of noir. Jimmy Corey writes with the energy of a brash newcomer and the polish of a seasoned pro. So where's the second book?"—George R.R. Martin on Leviathan Wakes

"High adventure equaling the best space opera has to offer, cutting-edge technology, and a group of unforgettable characters bring the third installment of Corey's epic space drama (after Caliban's War and Leviathan Wakes) to an action-filled close while leaving room for more stories to unfold. Perhaps one of the best tales the genre has yet to produce, this superb collaboration between fantasy author Daniel Abraham and Ty Franck should reawaken an interest in old-fashioned storytelling and cinematic pacing. Highly recommended."—Library Journal on Abaddon's Gate

"Literary space opera at its absolute best."—io9.com on Abaddon's Gate

"[T]he authors are superb with the exciting bits: Shipboard coups and battles are a thrill to follow."—Washington Post on Abaddon's Gate