Into the Dreaming (with bonus material) (Highlander #8) (Hardcover) 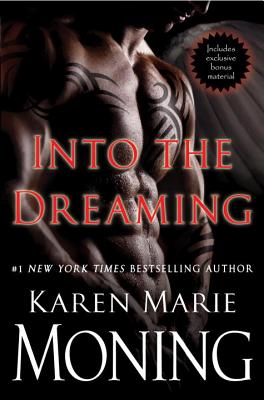 Into the Dreaming (with bonus material) (Highlander #8) (Hardcover)

This is book number 8 in the Highlander series.

Between the Highlander and Fever worlds lies a place beyond imagining.

This new edition of the novella contains more than 100 pages of bonus material, including:
• a deleted scene from Kiss of the Highlander
• a proposal for a never-published romance
• an alternate opening version of The Dark Highlander
• a sneak peek at art from the upcoming graphic novel Fever Moon

For the first time in hardcover, here is #1 New York Times bestselling author Karen Marie Moning’s novella Into the Dreaming, a tale of Highland fantasy, star-crossed lovers, and the timeless manipulation of the ancient, immortal Unseelie king. This is Moning at her romantic, funniest finest.

Stolen from his beloved home in the Highlands of Scotland, imprisoned in the Unseelie king’s dark, frosty kingdom, Aedan MacKinnon endured centuries of torture before becoming the icy, emotionless Vengeance, the dark king’s dispatcher of death and destruction in the mortal realm.

Aspiring romance novelist Jane Sillee has always believed that she was born in the wrong century, but she’s managed to make a decent enough life for herself—if only she could stop having those recurring dreams about a man too perfect to exist.

In the Dreaming you have loved him . . .

Haunted every night of her life by a devastatingly sexy Highlander who comes to her while she sleeps, Jane tries to write him out of her head and heart. As a child he protected her, as a woman he loves her.

When an ancient tapestry bearing the likeness of her beloved Highlander arrives on her doorstep, Jane is whisked back in time to fifteenth-century Scotland, to the castle of Dun Haakon on the isle of Skye, where she is given one chance to save her dream lover . . . or lose him forever to the Unseelie king.

Caught in a deadly game between the light and dark courts of the Fae, Jane must find a way through the ice to the heart of her Highander. But will the love of one mortal woman be enough to defeat such ancient and ruthless immortal enemies?
Karen Marie Moning is the #1 New York Times bestselling author of the Fever series, featuring MacKayla Lane, and the award-winning Highlander series. She has a bachelor’s degree in society and law from Purdue University.