An Uncommon Reader: A Life of Edward Garnett, Mentor and Editor of Literary Genius (Paperback) 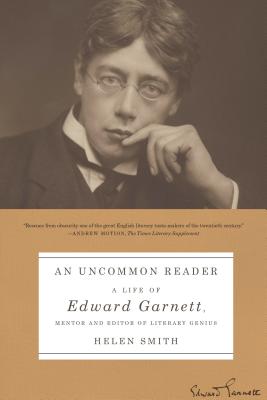 An Uncommon Reader: A Life of Edward Garnett, Mentor and Editor of Literary Genius (Paperback)

One of The Sunday Times' (U.K.) Books of the Year

During the course of a career spanning half a century, Edward Garnett—editor, critic, and reader for hire—would become one of the most influential men in twentieth-century English literature. Known for his incisive criticism and unwavering conviction in matters of taste, Garnett was responsible for identifying and nurturing the talents of a generation of the greatest writers in the English language, from Joseph Conrad to John Galsworthy, Henry Green to Edward Thomas, T. E. Lawrence to D. H. Lawrence.

In An Uncommon Reader, Helen Smith brings to life Garnett’s intimate and at times stormy relationships with those writers. (“I have always suffered a little from a sense of injustice at your hands,” Galsworthy complained in a letter.) All turned to Garnett for advice and guidance at critical moments in their careers, and their letters and diaries—in which Garnett often features as a feared but deeply admired protagonist—tell us not only about their creative processes, but also about their hopes and fears.

Beyond his connections to some of the greatest minds in literary history, we also come to know Edward as the husband of Constance Garnett—the prolific translator responsible for introducingTolstoy, Dostoevsky, and Chekhov to an English language readership—and as the father of David “Bunny” Garnett, who would make a name for himself as a writer and publisher.

“Mr. Edward Garnett occupies a unique position in the literary history of our age,” E. M. Forster wrote. “He has done more than any living writer to discover and encourage the genius of other writers, and he has done it without any desire for personal prestige.” An absorbing and masterfully researched portrait of a man who was a defining influence on the modern literary landscape, An Uncommon Reader asks us to consider the multifaceted meaning of literary genius.

Helen Smith is a British writer and scholar. She earned her PhD in literature from the University of East Anglia, where she is a lecturer in modern literature and the director of the master’s program in biography and creative nonfiction. She has won the Biographers’ Club Prize and the RSL Jerwood Award for Non-Fiction, and lives in South Norfolk with her husband. The Uncommon Reader is her first book.

"[A] prizeworthy literary biography . . . Though An Uncommon Reader is Helen Smith's first book, one would never know it: She delivers uncommonly good reading, and anyone interested in Edwardian fiction, the history of publishing or literary biography will find it a treat." —Michael Dirda, The Washington Post

"A-grade . . . Well-researched, neatly written and not above the occasional flash of sly humor, An Uncommon Reader is, necessarily, the study of a circle, or rather a milieu, as much as the man who stares doggedly from its cover." —DJ Taylor, The Guardian

"[An Uncommon Reader] rescues from obscurity one of the great English literary taste-makers of the twentieth century, and in the process sheds new light on some important writers, paints a portrait of the London publishing scene that remained largely unchanged until the big corporate buy-ups of the 1980s and 90s, and presents a character--Garnett himself--who is interesting, charming, and impressive . . . Garnett's Life will not need to be written again." —Andrew Morton, Times Literary Supplement

"One of the many delights of Helen Smith’s exemplary biography An Uncommon Reader is hearing Garnett’s own voice, sometimes pedantic, sometimes carried away with enthusiasm, pronouncing from the pages . . . There is a nugget on every page of Smith’s biography. She spirits up the whole jealous, bitching, scribbling literary world of the age. Garnett’s life, as she tells it, is witty, tragic and exultant. I could not put it down." —Laura Freeman, The Times (U.K.)

"Helen Smith's biography of [Garnett] is essential reading for anyone who cares about modernism." —The Sunday Times (U.K.)

"The strong-arming work of Edward Garnett is the bright and also dark star of Helen Smith’s lovely, telling biography. It’s a sort of Conrad novel manqué — pleasingly peopled by Russian anarchists and exiles, Fabians, pacifists, vegetarians and free-ish lovers, the keen Russophiliacs of the culture, with droves of writers, critics, and publishers all contentiously scrabbling away, all got up by Godfather Garnett." —Valentine Cunningham, The Spectator (UK)

"Superb . . . Smith, as Garnett would have appreciated, has an eye for the telling detail . . . and her book paints a textured picture of what life was like for people of Garnett's milieu . . . With Smith's fine sense of pacing and a fascinating subject, her book both delights and informs." —Publishers Weekly (starred review)