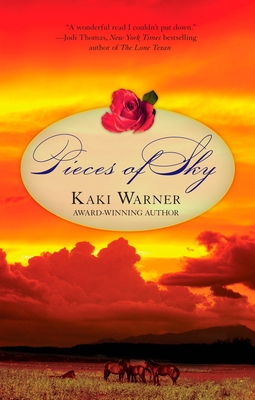 This is book number 1 in the Western Romance, A series.

A woman with no one to rely on finds a man she can trust with her heart in the first “flawlessly written”(Chicago Tribune) western romance in Kaki Warner’s Blood Rose Trilogy...

Jessica Thornton is a long way from her native England. An authoress and milliner, she carries the weight of a scandalous secret—a horrible shame that has brought her to the West on a desperate search for the only family she can trust: her brother.

No one prepared Jessica for the heat and the hardships—or for a man like Brady Wilkins. Despite the rancher’s rough-hewn appearance and her own misgivings, Jessica must put her life in Brady’s hands after their stagecoach crashes.

Soon, she begins to see the man behind the callused hands and caustic wit—a man strong enough to carve out a home in the wilderness and passionate enough to restore Jessica’s faith in herself...
Kaki Warner is a an award-winning author of numerous romance novels. A longtime resident of the Pacific Northwest, she now lives on the eastern slopes of the Cascade Mountains in Washington, but Kaki grew up in the Southwest, and is a proud graduate of the University of Texas. She spends her time gardening, reading, writing, and making lists of stuff for her husband to do while she soaks in the view from the deck of her hilltop cabin.
Praise for Pieces of Sky
2011 RITA Winner for Best First Book

“Readers may need a big box of Kleenex while reading this emotionally compelling, subtly nuanced tale of revenge, redemption, and romance, but this flawlessly written book is worth every tear.”—Chicago Tribune

“[An] auspicious debut...Warner develops [the] romance with well-paced finesse and great character work...[and] makes great use of the vivid Old West setting.”—Publishers Weekly

“From the first page, it's clear why debut author Warner has won several awards. Her western romance is a striking portrait of the territory in all its reality, harshness and beauty. Like Francine Rivers, Warner creates a novel of the human spirit's ability to conquer emotional and physical obstacles. She conveys her characters perfectly, giving them lives of their own.”—RT Book Reviews