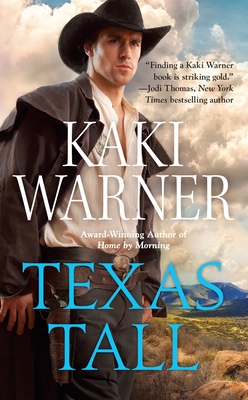 
Not currently available
Award-winning author Kaki Warner brings her trademark blend of humor, romance, and Western charm to the tale of a Texas Ranger troubled by past deeds and a strong-willed woman with a history of her own...

Seeking vengeance for a tragic past, Tyree Benton joined the Rangers and became a different man—but his brutal actions still twist his conscience. Now he’s found a woman he could love, but she deserves more than a man who makes a living getting shot at. If Ty were honorable, he’d leave her alone. But he can’t seem to stay away....

Orphaned at fourteen, Charlotte Weyland has used her talent for numbers to build enough of a fortune to fund Ty’s dream of owning a ranch…if he’s not too stubborn to accept her help. But when Charlotte’s past catches up to her, she finds herself on one side of the law with Ty on the other. To keep their dreams alive, they’ll have to make compromises, but doing so might cost them everything they have...
Kaki Warner is a RITA-winning author of numerous romance novels, including Home By Morning, Where the Horses Run, and Heartbreak Creek. A longtime resident of the Pacific Northwest, she lives on the eastern slopes of the Cascade Mountains in Washington, but Kaki grew up in the Southwest and is a proud graduate of the University of Texas. She spends her time gardening, reading, writing, and making lists of stuff for her husband to do while she soaks in the view from the deck of her hilltop cabin.
"From the new queen of Americana romance comes a moving tale of an independent woman and the man who appreciates her strength....Warner fans won't be disappointed with the large cast of characters and multiple love stories that leave them longing for more."—RT Book Reviews

Praise for the novels of Kaki Warner