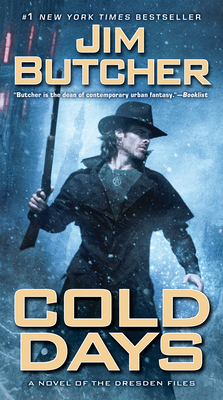 This is book number 14 in the Dresden Files series.

After a brief interlude in the afterlife, Harry Dresden’s new job makes him wonder if death was really all that bad in this novel in the #1 New York Times bestselling series.

Harry Dresden is no longer Chicago’s only professional wizard. Now, he’s Winter Knight to Mab, the Queen of Air and Darkness. Her word is his command. And her first command is the seemingly impossible: kill an immortal. Worse still, there is a growing threat to an unfathomable source of magic that could mean the deaths of millions.

Beset by enemies new and old, Harry must gather his friends and allies, prevent an apocalypse, and find a way out of his eternal subservience before his newfound infinite powers claim the only thing he has left to call his own...

A martial arts enthusiast whose résumé includes a long list of skills rendered obsolete at least two hundred years ago, #1 New York Times bestselling author Jim Butcher turned to writing as a career because anything else probably would have driven him insane. He lives mostly inside his own head so that he can write down the conversation of his imaginary friends, but his head can generally be found in Independence, Missouri. Jim is the author of the Dresden Files, the Codex Alera novels, and the Cinder Spires series, which began with The Aeronaut’s Windlass.
Praise for the Dresden Files