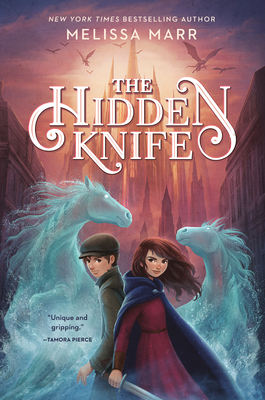 
Not Yet Published
“Unique and gripping.”—Tamora Pierce

New York Times bestselling author Melissa Marr invites readers into a magical world where stone gargoyles live among humans, ferocious water horses infiltrate the sea, and school hallways are riddled with magic wards--and where a group of young heroes seeking justice discovers those very creatures are the best of allies.

Twenty years ago, a door opened between the world of humans and the Netherwhere, allowing all kinds of otherworldly creatures entry. Some, like the kelpies and fairies, who like to bite, are best avoided. But the gargoyles are wise and wonderful, and show a special affection for humans.

Vicky has grown up under the watchful eye of a gargoyle named Rupert, and excels at sword-fighting and magic. But there's so much she doesn't know--like why her mother, once one of the queen's elite Ravens, keeps Vicky hidden away and won't let Vicky train at the elite Corvus school where girls with her gifts perfect their skills. But when a horrific tragedy occurs, Vicky knows  it’s finally time to use her gifts, and that the only place she should be to avenge the crime against her family is at Corvus. There she bands together with a former street thief and an alchemy student to figure out whom they can trust in a place that's rife with intrigue and secrets. And all the while, the gargoyles watch and nudge. Time’s not linear to them, so they know change comes in ripples. With their steadying influence, Vicky and her friends just might be the generation to expose the court’s secrets and ensure a better future for both worlds.
Melissa Marr writes fiction for adults, teens, and children. Her books have been translated into 28 languages and been bestsellers in the US (New York Times, Los Angeles Times, USA Today, Wall Street Journal) as well as in various countries overseas. She also wrote the best-selling picture book Bunny Roo, I Love You, and she is well-known for the Wicked Lovely series for teens and the Graveminder series for adults. She lives in Arizona with her spouse, children, and many dogs.
“Unique and gripping.”—Tamora Pierce

“Marr’s splashy offering is packed full of an extensive array of beloved fantasy tropes ranging from mystical creatures like gargoyles and kelpies to a magical boarding school, alchemists, thieves, and portals to other worlds. . . . A crowd pleaser . . . fast-paced chapters, each narrated from a different point of view. . . . This will be popular with a wide swath of readers. . . . A veritable buffet of fantasy conventions.”—Kirkus Reviews

“In narration that shifts focalization among the characters, Marr slowly and lovingly characterizes her magical world and its cast, giving each character a strong backstory and sprinkling in details that will become important later. Through the perspective of the gargoyle Rupert, this fantasy novel has a sweet lesson as well: that little acts are ‘ripples’ that can lead to great positive change, offering young readers hope that they can make their own impact.”—The Bulletin of the Center for Children’s Books