Beowulf: A Translation and Commentary (Paperback) 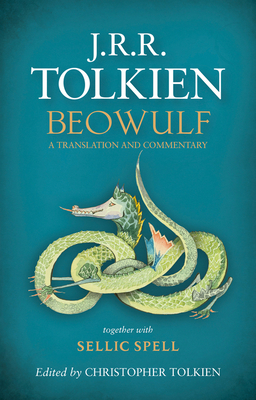 Beowulf: A Translation and Commentary (Paperback)

“A thrill . . . Beowulf was Tolkien’s lodestar. Everything he did led up to or away from it.” —New Yorker

J.R.R. Tolkien completed his translation of Beowulf in 1926: he returned to it later to make hasty corrections, but seems never to have considered its publication. This edition includes an illuminating written commentary on the poem by the translator himself, drawn from a series of lectures he gave at Oxford in the 1930s.

His creative attention to detail in these lectures gives rise to a sense of the immediacy and clarity of his vision. It is as if Tolkien entered into the imagined past: standing beside Beowulf and his men shaking out their mail-shirts as they beach their ship on the coast of Denmark, listening to Beowulf’s rising anger at Unferth’s taunting, or looking up in amazement at Grendel’s terrible hand set under the roof of Heorot.

“Essential for students of the Old English poem—and the ideal gift for devotees of the One Ring.” —Kirkus
J.R.R. TOLKIEN (1892–1973) is the creator of Middle-earth and author of such classic and extraordinary works of fiction as The Hobbit, The Lord of the Rings, and The Silmarillion. His books have been translated into more than fifty languages and have sold many millions of copies worldwide.

"A thrill . . . “Beowulf” was Tolkien’s lodestar. Everything he did led up to or away from it . . . Perhaps, in the dark of night, he already knew what would happen: that he would never publish his beautiful “Beowulf,” and that his intimacy with the poem, more beautiful, would remain between him and the poet—a secret love." -- New Yorker "Both scholars and lay readers have long awaited Tolkien's "Beowulf" translation and its related materials, and everyone will find something of enduring interest in this collection. For Tolkien, "Beowulf" was both a brilliant and haunting work in its own right and an inspiration for his own fiction. It is a poem that will move us as readers, not forever but as long as we last. Or as Tolkien says, "It must ever call with a profound appeal—until the dragon comes." -- Wall Street Journal "Tolkien-as-guide is delightful, an irresistibly chatty schoolmaster in the Chaucerian mold . . . His learning and Beowulf’s patterns of gloom and fragile light feel intimately related . . . his noble translation joins the ranks of the narrowly saved." – Slate "This rendition—edited by his son Christopher and published for the first time—will delight fans . . . lovers of Tolkien's work will agree that this is a book long overdue." – Publishers Weekly"A marvel of vigor and economy . . . Essential for students of the Old English poem—and the ideal gift for devotees of the One Ring." — Kirkus —