The Legend Of Sigurd And Gudrún (Paperback) 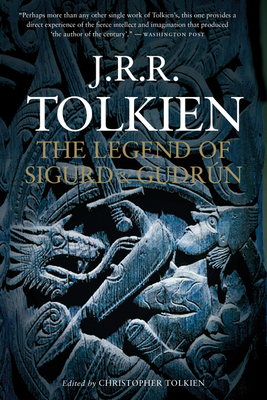 The Legend Of Sigurd And Gudrún (Paperback)


On Our Shelves Now
Many years ago, J.R.R. Tolkien composed his own version of the great legend of Northern antiquity, recounted here in The Legend of Sigurd and Gudrún. In the Lay of the Völsungs is told the ancestry of the great hero Sigurd, the slayer of Fáfnir, most celebrated of dragons; of his awakening of the Valkyrie Brynhild, who slept surrounded by a wall of fire, and of their betrothal; and of his coming to the court of the great princes who were named the Niflungs (or Nibelungs), with whom he entered into blood-brotherhood.  In scenes of dramatic intensity, of confusion of identity, thwarted passion, jealousy, and bitter strife, the tragedy of Sigurd and Brynhild, of Gunnar the Niflung and Gudrún his sister, mounts to its end in the murder of Sigurd, the suicide of Brynhild, and the despair of Gudrún.  The Lay of Gudrún recounts her fate after the death of Sigurd, her marriage against her will to the mighty Atli, ruler of the Huns (the Attila of history), his murder of her brothers, and her hideous revenge.
J.R.R. TOLKIEN (1892–1973) is the creator of Middle-earth and author of such classic and extraordinary works of fiction as The Hobbit, The Lord of the Rings, and The Silmarillion. His books have been translated into more than fifty languages and have sold many millions of copies worldwide.