Skin of the Sea (Of Mermaids and Orisa #1) (Hardcover) 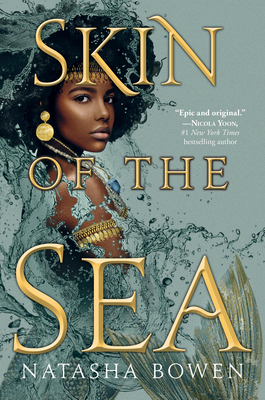 Skin of the Sea (Of Mermaids and Orisa #1) (Hardcover)

This is book number 1 in the Of Mermaids and Orisa series.

“Skin of the Sea is an absolute masterpiece. Not only is the mythology intricately displayed, but the story itself has given the representation young Black readers (specifically, young Black women) have been waiting for.”
— Hannah Oxley, Mystery to Me, Madison, WI

INSTANT NEW YORK TIMES BESTSELLER • The must-read Black mermaid fantasy series that #1 NYT bestselling author Nicola Yoon calls “epic and original,” in which one mermaid takes on the gods themselves. Perfect for fans of Children of Blood and Bone and Beasts of Prey.

Simi prayed to the gods, once. Now she serves them as Mami Wata—a mermaid—collecting the souls of those who die at sea and blessing their journeys back home.

But when a living boy is thrown overboard, Simi goes against an ancient decree and does the unthinkable—she saves his life. And punishment awaits those who dare to defy the gods.

To protect the other Mami Wata, Simi must journey to the Supreme Creator to make amends. But all is not as it seems. There's the boy she rescued, who knows more than he should. And something is shadowing Simi, something that would rather see her fail . . .

Danger lurks at every turn, and as Simi draws closer, she must brave vengeful gods, treacherous lands, and legendary creatures. Because if she fails, she risks not only the fate of all Mami Wata, but also the world as she knows it.
Natasha Bowen is a New York Times bestselling author, a teacher, and a mother of three children. She is of Nigerian and Welsh descent and lives in Cambridge, England, where she grew up. Natasha studied English and creative writing at Bath Spa University before moving to East London, where she taught for nearly ten years. Skin of the Sea is her debut novel and the start of an epic series born out of her passion for mermaids and African history. Natasha is obsessed with Japanese and German stationery and spends stupid amounts on notebooks, which she then features on her secret Instagram. When she's not writing, she's reading, watched over carefully by Milk and Honey, her cat and dog. Follow her on Twitter at @skinofthesea.
An Instant New York Times Bestseller
An NPR Best Book of the Year
A PopSugar Best New Book – November 2021
A Publishers Weekly Best Book of the Year

"Bowen has built an impressive mythology to buttress her fairy tale, and it's a pleasure to discover this world through Simi's eyes." —The New York Times

"Riveting . . . I'm sure that Simi has many ardent fans to await her further adventures." —NPR

“Skin of the Sea is one of the most epic and original fantasies I've read. . . . Simi's story will stay with me for a long time to come.” —Nicola Yoon, #1 New York Times bestselling author of Instructions for Dancing

“The most engrossing, thought-provoking, beautiful novel I’ve read in ages. Skin of the Sea knocks your socks off and leaves you wanting more." —Namina Forna, New York Times bestselling author of The Gilded Ones

“An enchanting, unputdownable fantasy. Bowen’s lush world building and beautiful prose will have you rooting for these characters from page one. A triumph of storytelling.” —Kalynn Bayron, New York Times bestselling author of This Poison Heart

★ "Reinvigorating the image of West Africa as not merely a site of human suffering but a historical place of great invention, fellowship, and hope, Bowen relays a story as lushly described as it is cinematic, centering a brave, headstrong protagonist coming into her own power in an age of change." —Publishers Weekly, starred review

★ "Any story about literal Black girl magic featuring a Black mermaid is sure to shine, but Bowen’s story swims to sparkling heights.” —Booklist, starred review

"Give this book to everyone, but especially fans of mythological and well-crafted fantasy." —School Library Journal

"Those who have been riveted by the many new West African-inspired novels of the last few years including Children of Blood and Bone and The Gilded Ones will find this a worthy addition to the genre, and readers new to an African fantasy setting have an excellent introduction here." —The Bulletin of the Center for Children's Books

"An inspired take on Hans Christian Andersen's 'The Little Mermaid' that blends West African religion and history in an immersive adventure. . . . Skin of the Sea painfully entwines love and sacrifice to create a story as powerful and majestic as the sea itself." —BookPage

"Bowen combines a classic quest plot with a rich and still-underrepresented mythology . . . [an] inventive supernatural fantasy." —The Horn Book