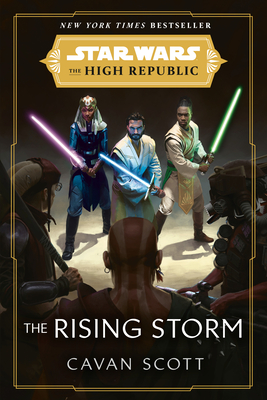 
Usually Ships in 1-5 Days
NEW YORK TIMES BESTSELLER • The heroes of the High Republic era return to face a shattered peace and a fearsome foe, following the dramatic events of Light of the Jedi.

In the wake of the hyperspace disaster and the heroism of the Jedi, the Republic continues to grow, bringing more worlds together under a single unified banner. Under the leadership of Chancellor Lina Soh, the spirit of unity extends throughout the galaxy, with the Jedi and the newly established Starlight Beacon station at the vanguard.

In celebration, the chancellor plans the Republic Fair, a showcase of the possibilities and the peace of the expanding Republic—a peace the Jedi hope to foster. Stellan Gios, Bell Zettifar, Elzar Mann, and others join the event as ambassadors of harmony. But as the eyes of the galaxy turn toward the fair, so too does the fury of the Nihil. Their leader, Marchion Ro, is intent on destroying this unity. His storm descends on the pageantry and celebration, sowing chaos and exacting revenge.

As the Jedi struggle to curb the carnage of the rampaging Nihil, they come face-to-face with the true fear their enemy plans to unleash across the galaxy—the kind of fear from which even the Force cannot shield them.
Cavan Scott is a number one UK bestselling author who has written for such popular worlds as Star Wars, Doctor Who, Star Trek, Assassin’s Creed, Transformers, Pacific Rim, and Sherlock Holmes. He is the writer of Star Wars: Dooku: Jedi Lost, The Patchwork Devil, and Shadow Service and is one of the story architects for Lucasfilm’s epic multimedia initiative Star Wars: The High Republic. He has written comics for Marvel, IDW, Dark Horse, Vertigo, 2000 AD, and The Beano. A former magazine editor, Scott lives in Bristol with his wife and daughters. His lifelong passions include classic scary movies, folklore, audio drama, the music of David Bowie, and walking. He owns far too much LEGO.