There Are Places in the World Where Rules Are Less Important Than Kindness: And Other Thoughts on Physics, Philosophy and the World (Hardcover) 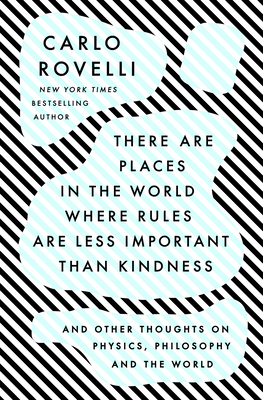 There Are Places in the World Where Rules Are Less Important Than Kindness: And Other Thoughts on Physics, Philosophy and the World (Hardcover)


On Our Shelves Now
A delightful intellectual feast from the bestselling author of Seven Brief Lessons on Physics, The Order of Time, and Anaximander

One of the world’s most prominent physicists and fearless free spirit, Carlo Rovelli is also a masterful storyteller. His bestselling books have introduced millions of readers to the wonders of modern physics and his singular perspective on the cosmos. This new collection of essays reveals a curious intellect always on the move. Rovelli invites us on an accessible and enlightening voyage through science, literature, philosophy, and politics.

Written with his usual clarity and wit, this journey ranges widely across time and space: from Newton's alchemy to Einstein's mistakes, from Nabokov’s lepidopterology to Dante’s cosmology, from mind-altering psychedelic substances to the meaning of atheism, from the future of physics to the power of uncertainty. Charming, pithy, and elegant, this book is the perfect gateway to the universe of one of the most influential minds of our age.
Carlo Rovelli is a theoretical physicist who has made significant contributions to the physics of space and time. He has worked in Italy and the United States, and is currently directing the quantum gravity research group of the Centre de Physique Théorique in Marseille, France. His books Seven Brief Lessons on Physics, Reality Is Not What It Seems, The Order of Time, and Helgoland are international bestsellers that have been translated into more than fifty languages.
Praise for Rovelli and There Are Places:

“Provocative. . . . Rovelli’s fans will enjoy having this on their shelves.” —Publishers Weekly

“Rovelli delights. His facility with science and philosophy is exemplary.” —Kirkus

"Some physicists, mind you, not many of them, are physicist-poets. They see the world or, more adequately, physical reality, as a lyrical narrative written in some hidden code that the human mind can decipher. Carlo Rovelli, the Italian physicist and author, is one of them." —NPR Cosmos & Culture

"If your desire to be awestruck by the universe we inhabit needs refreshing, theoretical physicist Carlo Rovelli...is up to the task." —Elle