We Are Still Here: Afghan Women on Courage, Freedom, and the Fight to Be Heard (Paperback) 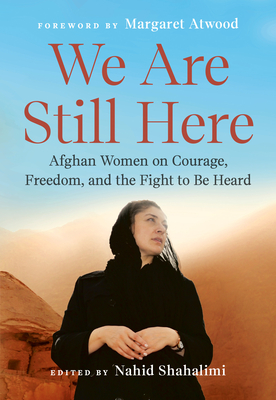 We Are Still Here: Afghan Women on Courage, Freedom, and the Fight to Be Heard (Paperback)


On Our Shelves Now
A collection of first-hand accounts from courageous Afghan women who refuse to be silenced in the face of the Taliban, to be published for the first anniversary of the US leaving Afghanistan.

After decades of significant progress, the prospects of women and girls in Afghanistan are once again dependent on radical Islamists who reject gender equality. When the United States announced the end of their twenty-year occupation and the Taliban seized control of the country on August 15th, 2021, so began a steep regression of social, political, and economic freedoms for women in the country.

But just because a brutal regime has taken over doesn't mean Afghan women will stand by while their rights are stripped away. In We Are Still Here, artist and activist Nahid Shahalimi compiles the voices of thirteen powerful, insightful, and influential Afghan women who have worked as politicians, journalists, scientists, filmmakers, artists, coders, musicians, and more. As they reflect on their country's past, stories of their own upbringing and the ways they have been able to empower girls and women over the past two decades emerge. They report on the fear and pain caused by the impending loss of their homeland, but above all on what many girls and women in Afghanistan have already lost: freedom, self-determination, and joy.

The result is an arresting book that issues an appeal to remember Afghan girls and women and to show solidarity with them. Like us, they have a right to freedom and dignity, and together we must fight for their place in the free world because Afghanistan is only geographically distant. Extremist ideas know no limits.
Nahid Shahalimi was born in Afghanistan and left with her family when she was young to begin a new life in Canada. She later moved to Germany, where she works today as an author, artist, and social entrepreneur. She started travelling to Afghanistan in 2011, visiting Kabul and remote provinces to interview Afghan women. In 2017 she published her first book in German, Where Courage Bears the Soul, to great acclaim. The following year she released her award-winning film We The Women of Afghanistan: A Silent Revolution. We Are Still Here is her first English language publication.
"[An] impassioned testimony to women’s determination.” —Kirkus

“...an inspiring portrait of perseverance in the face of cruelty and injustice.”
—Publishers Weekly

“Provide[s] important detail and fascinating personal narratives that highlight how Afghan women and girls embraced the opportunities afforded them over the past 20 years... I remain in awe of their resilience.” —NPR