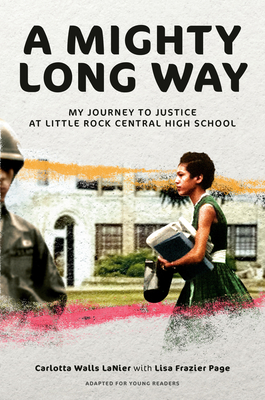 
On Our Shelves Now
Follow the story of Carlotta Walls LaNier, who in 1957 at the age of fourteen was one of nine black students who integrated the all-white Little Rock Central High School and became known as the Little Rock Nine.

At fourteen years old, Carlotta Walls was the youngest member of the Little Rock Nine. The journey to integration in a place deeply against it would not be not easy. Yet Carlotta, her family, and the other eight students and their families answered the call to be part of the desegregation order issued by the US Supreme Court in its 1954 Brown v. Board of Education case.
As angry mobs protested, the students were escorted into Little Rock Central High School by escorts from the 101st Airborne Division, which had been called in by then-president Dwight D. Eisenhower to ensure their safety. The effort needed to get through that first year in high school was monumental, but Carlotta held strong. Ultimately, she became the first Black female ever to walk across the Central High stage and receive a diploma.
The Little Rock Nine experienced traumatic and life-changing events not only as a group but also as individuals, each with a distinct personality and a different story. This is Carlotta's courageous story.
CARLOTTA WALLS LANIER attended Michigan State University and graduated from Colorado State College, now the University of Northern Colorado, on whose board of trustees she sits. After working for the YWCA, she founded her own real estate brokerage firm, LaNier and Company. A sought-after lecturer, LaNier speaks at venues across the country, and she has received the Congressional Medal of Honor and two honorary doctorate degrees. She lives in Englewood, Colorado.

LISA FRAZIER PAGE, a professional-in-residence at Louisiana State University, is a former editor and award-winning reporter at the Washington Post. She is coauthor of the New York Times bestseller The Pact: Three Young Men Make a Promise and Fulfill a Dream, and she has collaborated on several other books. A graduate of Dillard University in New Orleans, Page holds a master’s degree from Northwestern University’s Medill School of Journalism. She lives in the New Orleans metropolitan area with her husband, and they have four adult children.
★ "A compelling and necessary account of facing and surviving injustice." —Kirkus Reviews, starred review