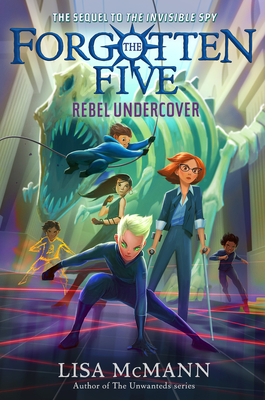 This is book number 3 in the The Forgotten Five series.

X-Men meets Spy Kids in the third installment of The Forgotten Five middle-grade fantasy/adventure series by the New York Times bestselling author of The Unwanteds.

Estero City is in an uproar following the exposure of President Fuerte's superpowers. Meanwhile, the forgotten five, the ones behind the leak to the press, are reeling from Cabot's decision to leave the group to be with her parents—who are collaborating with the corrupt president.

But there's work to be done, and The Librarian has a daring new plan: Lada will go undercover and pretend to work for the president while gathering intelligence for the supernatural resistance.

Loyalties will be put to the test and alliances will shift as the forgotten five face off against their most powerful enemy yet: their own criminal parents.
Lisa McMann is the New York Times and USA Today bestselling author of dozens of books, including The Forgotten Five series; The Unwanteds series; the Wake trilogy; and Clarice the Brave. She is married to fellow writer Matt McMann, and they have two adult children—their son is artist Kilian McMann, and their daughter is actor Kennedy McMann. Lisa spends most of her time in Arizona, California, and Vancouver, British Columbia, and loves to cook, read, and watch reality TV. You can visit Lisa at lisamcmann.com and follow her on Twitter, Instagram, and TikTok @lisa_mcmann.