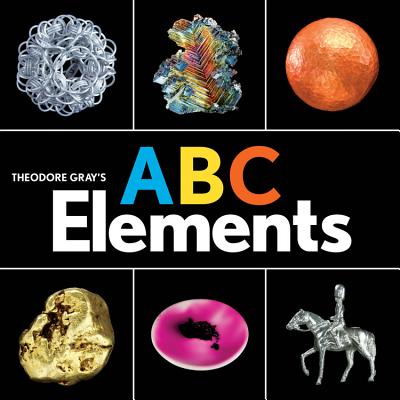 
On Our Shelves Now
A delightful new Elements board book that teaches baby, age 0-3, all about the ABCs and the elements of the periodic table at the same time. With baby-friendly text and big, bright colorful photographs!
ABC ELEMENTS features 26 elements that represent each of the letters of the alphabet-A for Aluminum, B for Bismuth, C for Copper etc. Each letter of the alphabet will be illustrated with a big, beautiful photograph of the element from Theodore Gray's famous photographic element collection.
Theodore Gray is the author of The Elements, Molecules, and Reactions, My First Elements board book as well as Theodore Gray's Completely Mad Science. He is the creator of the bestselling iPad apps "Elements" and "Molecules," which have both been named "App of the Week" by Apple and was Director of "Disney Animated" (also honored by Apple as "iPad App of the Year"). Gray appeared on stage with Steve Jobs several times in his capacity as a software creator. He also co-founded Wolfram Research, Inc., makers of the widely-used software Mathematica and the Wolfram Alpha website. He lives in Urbana, Illinois.