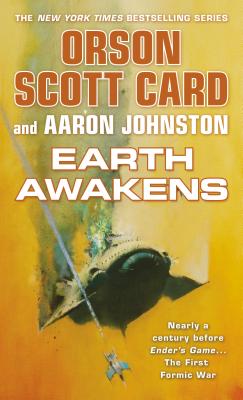 This is book number 3 in the The First Formic War series.

The story of The First Formic War continues in Earth Awakens.

Nearly 100 years before the events of Orson Scott Card's bestselling novel Ender's Game, humans were just beginning to step off Earth and out into the Solar System. A thin web of ships in both asteroid belts; a few stations; a corporate settlement on Luna. No one had seen any sign of other space-faring races; everyone expected that First Contact, if it came, would happen in the future, in the empty reaches between the stars. Then a young navigator on a distant mining ship saw something moving too fast, heading directly for our sun.

When the alien ship screamed through the solar system, it disrupted communications between the far-flung human mining ships and supply stations, and between them and Earth. So Earth and Luna were unaware that they had been invaded until the ship pulled into Earth orbit, and began landing terra-forming crews in China. Politics and pride slowed the response on Earth, and on Luna, corporate power struggles seemed more urgent than distant deaths. But there are a few men and women who see that if Earth doesn't wake up and pull together, the planet could be lost.

“The sections that feature highly intelligent, self-reliant children--Card's trademark--are as excellent as ever; elsewhere there's plenty of solid action, well-developed characters….Another solidly engrossing installment, where the aliens are really just a sideshow: What we're witnessing is how and why Ender's child armies came to be.” —Kirkus Reviews on Earth Afire

“While the reader knows who wins the war, the fate of the engaging characters in this story is up in the air. Thirty-five years after he introduced Ender to the world, it's great to see that Orson Scott Card is still making magic in this imaginative world.” —New York Journal of Books on Earth Afire

“The pacing and the vivid action scenes will satisfy hard-core military-SF buffs. At the same time, the characters and the ethical foundations under them are at the high level we have come to associate with Card. Laying their own foundations under Card's Ender Wiggins saga, the Formic Wars promise to add to Card's already high reputation and to his collaborator's as well.” —Booklist, starred review on Earth Afire

“Card and Johnston explore human ignorance and compassion through a tapestry of galactic warfare in the second volume of the Formic Wars trilogy.... Social upheavals and political ineptitude are realized through rich characterization and brisk action.” —Publishers Weekly on Earth Afire