The Thirtymile Fire: A Chronicle of Bravery and Betrayal (Paperback) 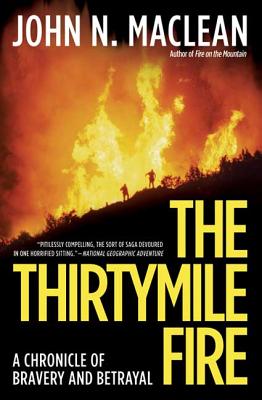 The Thirtymile Fire: A Chronicle of Bravery and Betrayal (Paperback)

"Pitilessly compelling, the sort of saga devoured in one horrified sitting."—National Geographic Adventure

The Thirtymile Fire in the North Cascade Range near the Canadian border of Washington began as a simple mop-up operation; in a few hours, a series of catastrophic errors led to the entrapment and deaths of four members of the fire crew—two teenage girls and two young men. Each had brought order and meaning to their lives by joining the firefighting world. Then the very flames they pursued turned on them, extinguishing their lives.

Weaving together the astonishing stories told by the fire's witnesses and, later, the victims' family members and the response to the official reports, John N. Maclean creates a riveting account of the deadly Thirtymile Fire and the controversy and recriminations that raged in its aftermath.

John N. Maclean’s Fire on the Mountain was the MPBA best nonfiction title of 1999. A newspaper reporter and longtime student of wildfire, he assisted in the posthumous publication of his father, Norman Maclean’s, Young Men and Fire. He divides his time between Washington, D.C., and Montana. Fire and Ashes (0-8050-7591-7) was selected as a Chicago Tribune Best Book of 2003.