Shadow of the Giant (The Shadow Series #4) (Mass Market) 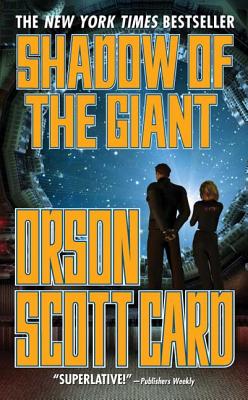 Shadow of the Giant (The Shadow Series #4) (Mass Market)

This is book number 4 in the The Shadow Series series.

The Ender Saga continues with Shadow of the Giant, which parallels the events of Ender's Game from a different character’s point of view.

Bean's past was a battle just to survive. He first appeared on the streets of Rotterdam, a tiny child with a mind leagues beyond anyone else. He knew he could not survive through strength; he used his tactical genius to gain acceptance into a children's gang, and then to help make that gang a template for success for all the others. He civilized them, and lived to grow older. Then he was discovered by the recruiters for the Battle School.

For Earth was at war - a terrible war with an inscrutable alien enemy. A war that humanity was near to losing. But the long distances of interstellar space has given hope to the defenders of Earth - they had time to train military geniuses up from childhood, forging them into an irresistible force in the high-orbital facility called the Battle School. That story is told in two books, Orson Scott Card's beloved classic Ender's Game, and its parallel, Ender's Shadow. Now, in Shadow of the Giant, Bean's story continues.

Bean was the smallest student at the Battle School, but he became Ender Wiggins' right hand, Since then he has grown to be a power on Earth. He served the Hegemon as strategist and general in the terrible wars that followed Ender's defeat of the alien empire attacking Earth. Now he and his wife Petra yearn for a safe place to build a family - something he has never known - but there is nowhere on Earth that does not harbor his enemies - old enemies from the days in Ender's Jeesh, new enemies from the wars on Earth. To find security, Bean and Petra must once again follow in Ender's footsteps. They must leave Earth behind, in the control of the Hegemon, and look to the stars.

“This fine follow-up to Ender's Shadow features that novel's hero, Bean (now a young man), wrestling with Card's trademark: superbly real moral and ethical dilemmas....The complexity and serious treatment of the book's young protagonists will attract many sophisticated YA readers, while Card's impeccable prose, fast pacing and political intrigue will appeal to adult fans of spy novels, thrillers, and science fiction.” —Publishers Weekly (starred review) on Shadow of the Hegemon

“Card has taken the venerable SF concepts of a superman and an interstellar war against aliens, and, with superb characterization, pacing, and language, combined them into a seamless story of compelling power.” —Booklist on Ender's Game

“You can't step into the same river twice, but Card has gracefully dipped twice into the same inkwell--once for Ender's Game, and again for his stand-alone 'parallel novel'. As always, everyone will be struck by the power of Card's children, always more and less than human, perfect yet struggling, tragic yet hopeful, wondrous and strange.” —Publishers Weekly (starred review) on Ender's Shadow

“The author's superb storytelling and his genuine insight into the moral dilemmas that lead good people to commit questionable actions make this title a priority purchase for most libraries.” —Library Journal on Ender's Shadow