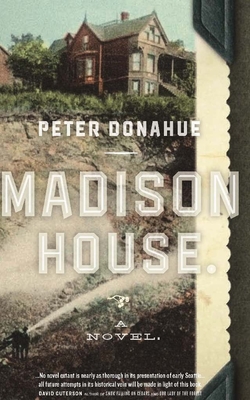 
Not currently available
Peter Donahue's debut novel Madison House chronicles turn-of-the-century Seattle's explosive transformation from frontier outpost to major metropolis. Maddie Ingram, owner of Madison House, and her quirky and endearing boarders find their lives inextricably linked when the city decides to re-grade Denny Hill and the fate of Madison House hangs in the balance. Clyde Hunssler, Maddie's albino handyman and furtive love interest; James Colter, a muckraking black journalist who owns and publishes the Seattle Sentry newspaper; and Chiridah Simpson, an aspiring stage actress forced into prostitution and morphine addiction while working in the city's corrupt vaudeville theater, all call Madison House home. Had E.L. Doctorow and Charles Dickens met on the streets of Seattle, they couldn't have created a better book.
PETER DONAHUE is an Associate Professor of English at Birmingham-Southern College. He is co-editor of the anthology Reading Seattle: The City in Prose and author of the short story collection The Cornelius Arms. His stories have appeared in over 25 literary magazines and his literary awards include first place in the OSU Short Fiction Award and two Pushcart nominations.

PETER DONAHUE SEEMS TO HAVE A MAP of old Seattle in his head. No novel extant is nearly as thorough in its presentation of the early city, and all future attempts in its historical vein will be made in light of this book. DAVID GUTERSON, author of Snow Falling on Cedars and Our Lady of the Forest

MADISON HOUSE TREATS READERS to a boarding house full of fascinating and lovable characters as they create their own identities and contribute to early 20th century life in Seattle. Every page reflects Peter Donahue’s meticulous and imaginative recreation of a lively and engaging moment in American history. I loved reading this novel and sharing in the pleasures and labors of the diverse and authentic inhabitants of a remarkable city. SENA JETER NASLUND, author of Four Spirits and Ahab’s Wife

PETER DONAHUE CRAFTS A RESPLENDENT NOVEL examining life in Seattle in the early 20th century, complete with a Dickensian cast of unforgettable characters; a handsome edition from a rising literary house in Portland. SEATTLE POST INTELLIGENCER

THE HISTORICAL DETAIL IS COMPELLING and effectively interlaced with the action. Those interested in the history of the Northwest will find much to savor here. BOOKLIST

AN AMBITIOUS NOVEL... Donahue’s story is a paean to a significant part of the city’s history. THE SEATTLE TIMES

MADISON HOUSE IS REMINISCENT OF THE TOMES OF THE 19TH CENTURY - filled with descriptive passages and forays into the lives of various characters, telling, ultimately, the tale of Seattle's emergence as a city during the first decade of the 20th century. The author's research shows, but does not intrude. The characters are unique and believable... Peter Donahue has penned a memorable chronicle of life in the Pacific Northwest one hundred years ago. THE HISTORICAL NOVELS REVIEW

DONAHUE'S AFFECTING LITERARY narrative successfully incorporates social, political, and cultural history as seen through the eyes of the dispossessed, disadvantaged, and disenfranchised in a pivotal time in Seattle's history. THE ABSINTHE LITERARY REVIEW