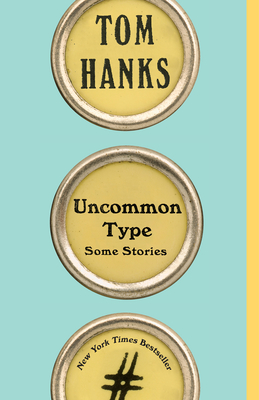 “Wow! Here is a collection of stories that are at times funny, often moving, and really, really good, if not great. 'Welcome to Mars' is perhaps my favorite. It's Kirk's 19th birthday, and he joins his father to go surfing on what turns out to be a defining day in his life. And then there's 'Alan Bean Plus Four,' which is a hilarious telling of four friends' journey to the moon. Read it. You'll be pleasantly surprised by Tom Hanks' writing.”
— Randy Schiller, Left Bank Books, Saint Louis, MO

One of the Best Books of the Year: NPR, USA Today

A small-town newspaper columnist with old-fashioned views of the modern world. A World War II veteran grappling with his emotional and physical scars. A second-rate actor plunged into sudden stardom and a whirlwind press junket. Four friends traveling to the moon in a rocketship built in the backyard. These are just some of the stories that Tom Hanks captures in his first work of fiction: a collection of shorts that explore—with great affection, humor, and insight—the human condition in all its foibles. The stories are linked by one thing: in each of them, a typewriter plays a part, sometimes minor, sometimes central.

To many, typewriters represent a level of craftsmanship, beauty, and individuality that is harder and harder to find in the modern world. In these stories, Hanks gracefully reaches that typewriter-worthy level. By turns whimsical, witty, and moving, Uncommon Type establishes him as a welcome and wonderful new voice in contemporary fiction.
Tom Hanks has been an actor, screenwriter, director and, through Playtone, a producer.  His writing has appeared in The New York Times, Vanity Fair, and The New Yorker.  This is his first collection of fiction.
“Wonderful.” —NPR

“Offers heartfelt charm. . . . Even when Hanks writes about somber subjects . . . he finds a sweet spot.” —NPR

“These stories are a hit. . . . There is life here, and humour, along with evocative moments of reflection on the state of the American dream.” —Financial Times

“Reading Tom Hanks’s Uncommon Type is like finding out that Alice Munro is also the greatest actress of our time.” —Ann Patchett

“Delightful. . . . Moving. . . . Filled with warmth, comedy and wisdom, this companionable collection is as appealing as its author.” —BookPage

“As charming and as (the descriptor has become unavoidable) all-American as the author himself.” —Time

“A collection that showcases [Hanks’s] love of words and typewriters.” —O, The Oprah Magazine

“There is often a powerful sense of other lives imagined at a level that goes deeper than writerly research.” —The Guardian

“A debut short story collection that’s as engaging it is charming.” —Paste

“The central quality to Tom’s writing is a kind of poignant playfulness. It’s exactly what you hope from him, except you wish he were sitting in your home, reading it aloud to you, one story at a time.” —Mindy Kaling

“Skillfully crafted. . . . Smart and equally heartfelt, this collection is a must-read for fans of the actor and literary lovers alike.” —Bustle

“Spiked with humor, whimsy and insight. . . . Mr. Hanks creates a strong sense of people, places and possibilities. . . . The short stories in Uncommon Type often explore what might have been, what was before (and after) the divorce, or the move, or the press junket gone awry.” —Pittsburgh Post-Gazette

“Funny, wise, gloriously inventive and humane. Tom Hanks sees inside people—a wary divorcee, a billionaire trading desire for disaster, a boy witnessing his father’s infidelity, a motley crew shooting for the moon—with such acute empathy and good humour we’d follow him anywhere.” —Anna Funder, author of Stasiland and All That I Am

“Tom Hanks is a natural born storyteller. . . . He belongs to a tradition of American storytellers that includes Mark Twain or O Henry although there is a range of work in Uncommon Type that defies such a catch-all definition. . . . There is an ease in his writing and a pleasure in the reading.” —The Scotland Herald
“Creative and funny. . . . Cut[s] right down to the bone of human nature.” —Austin Chronicle

“The stories in Uncommon Type range from the hilarious to the deeply touching. . . . All demonstrate a joy in writing, a pleasure in communicating an intensely American sense of atmosphere, friendship, life and family that is every bit as smart, engaging and humane as the man himself.” —Stephen Fry

“Superbly observed. . . . [There is a] variety of voices here, all of them masterfully hewn and cosily embedded.” —Irish Independent

“Delightful. . . . Hanks’s prose is impressive, with a strong voice and stylistic flair. . . . Fluent, convincing and confident.” —The Times (London)