I Like You Just the Way I Am: Stories About Me and Some Other People (Paperback) 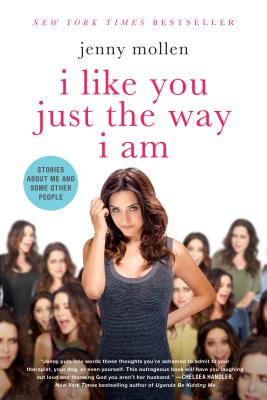 I Like You Just the Way I Am: Stories About Me and Some Other People (Paperback)

Hi, I'm Jenny Mollen, an actress and writer living in Los Angeles. I'm also a wife, married to someone more famous than me, which is especially annoying because all the free clothing he gets never come in a size small.

This is my book, an assortment of stories about not doing the right thing. Yes, it's about me. But it's also about women, who all come in two types: those that are totally batshit crazy, and those that are liars. It's a book about acting on impulses, plotting elaborate hoaxes, and refusing to acknowledge boundaries in any form. Like hiding in the trunk of a car to get a look at the girl who used to fuck my husband. Or pretending to have a seizure on a red-eye to New York in order to explain why my dog is balls-deep in a bag of Pirates' Booty burrowed in the lap of a sleeping child.

Life is too short for bullshit. I'm 33 and my tits drop half an inch a year. Someday very soon, ladies, you and I are going to be whatever fetish comes after "cougar," unable to wear shirts without sleeves, and full of cell phone cancer. It is our obligation to be honest with ourselves about who we really are and what we really want. Which more often than not is someone else's email password.

So let's embrace it. I Like You Just the Way I Am is a book about taking the high road—as long as it intersects with the train tracks my ex-boyfriend is tied to.

Actress and writer Jenny Mollen is an Arizona native and graduate of the UCLA School of Theater. Her television credits include Wilfred, Suits, CSI: New York, Hawaii 5-0, Crash, and the WB series Angel, where she portrayed the iconic character Nina Ash. She was a recurring character on the third season of HBO’s breakout hit, GIRLS. Jenny’s feature film credits include D.E.B.S., My Best Friend’s Girl, L!fe Happens, and Crazy, Stupid, Love. She has written for Cosmopolitan.com, and her column "What She Said" appears on Playboy Online. Heralded by The Huffington Post as one of the funniest women on both Twitter and Instagram. Jenny earned two nominations and one win at this year’s Twitter Awards. She lives in Los Angeles with two poodle angel-muffins and an asshole miniature pinscher who she hopes dies soon. She also has a husband. I Like You Just the Way I Am is her first book.

“Jenny's type of fucked up is the kind I want to squish up and put in my bag and keep with me all the time--and now I can. Thanks, America.” —Kelly Oxford, author of the New York Times bestselling Everything is Perfect When You're a Liar

“Filth. If you like your ladies hot and your filth filthy, this is the book for you. Jenny is bitchy and body-obsessed, husband-obsessed, self-aggrandizing, and always amazing.” —Michael Ian Black, author of the New York Times bestselling My Custom Van

“Jenny is crazy. She has the craziest Twitter--everyone should follow her. Somebody needs to make it into a TV show.” —Chelsea Handler, author of the New York Times bestselling Lies that Chelsea Handler Told Me