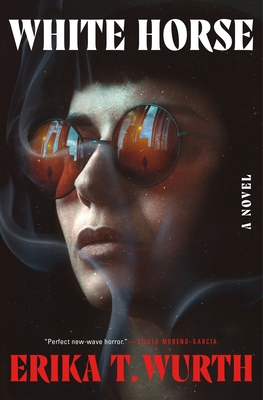 “Such a great horror story about family, friendship, and facing your demons. After finishing this one, I have a strong desire to reread The Shining and blast some Megadeth. I’m excited to see what Erika T. Wurth writes next!”
— John Cauley, The Doylestown & Lahaska Bookshops, Doylestown, PA

"This ghost story is a perfect example of new wave horror that will also satisfy fans of classic Stephen King." —Silvia Moreno-Garcia, author of The Daughter of Doctor Moreau and Mexican Gothic

Erika T. Wurth's White Horse is a gritty, vibrant debut novel about an Indigenous woman who must face her past when she discovers a bracelet haunted by her mother’s spirit.

Some people are haunted in more ways than one…

Kari James, Urban Native, is a fan of heavy metal, ripped jeans, Stephen King novels, and dive bars. She spends most of her time at her favorite spot in Denver, a bar called White Horse. There, she tries her best to ignore her past and the questions surrounding her mother who abandoned her when she was just two years old.

But soon after her cousin Debby brings her a traditional bracelet that once belonged to Kari’s mother, Kari starts seeing disturbing visions of her mother and a mysterious creature. When the visions refuse to go away, Kari must uncover what really happened to her mother all those years ago. Her father, permanently disabled from a car crash, can’t help her. Her Auntie Squeaker seems to know something but isn’t eager to give it all up at once. Debby’s anxious to help, but her controlling husband keeps getting in the way.

Kari’s journey toward a truth long denied by both her family and law enforcement forces her to confront her dysfunctional relationships, thoughts about a friend she lost in childhood, and her desire for the one thing she’s always wanted but could never have…

Erika T. Wurth’s work has appeared in numerous journals including Buzzfeed and The Kenyon Review. White Horse is her debut novel. She is a Kenyon Review Writers Workshop Scholar, attended the Tin House Summer Workshop, and is a narrative artist for the Meow Wolf Denver installation. She is of Apache/Chickasaw/Cherokee descent.

“Twisty and electric. . . . Wurth handles the suspense with an expert hand. The novel unfolds in short, tense chapters that glide between past and present, and often torque into hair-raising turns.” —New York Times Book Review (Editor’s Choice)

“Superb. . . . An easy, fast read that almost demands to be devoured in a single sitting. . . . [Wurth] has pushed against narratives that perpetuate Native American clichés, which makes this a must-read.” —NPR.org

“Crack open a cold one, pull on a well-worn band T-shirt and get ready for some spine tingles.” —Good Housekeeping

“A debut ghost story that will knock your socks off.” —Ms. Magazine

“Stylish. . . . Old-school Stephen King fans, get on board.” —Philadelphia Inquirer

“An absolute stunner.” —Katy Hays, bestselling author of The Cloisters

“It’s metal to the end, it’s Denver to the core, it’s Native without trying–there’s blood, there’re roller coasters, and there’re about a thousand cigarettes smoked. What else can you ask for in a novel?” —Stephen Graham Jones, New York Times bestselling author of The Only Good Indians

"Family ties are made from rusty barbed wire in White Horse, a book that feels as welcome as a dark bar on a hot afternoon, and whose story burns like a shot of rotgut whiskey." —Grady Hendrix, bestselling author of The Final Girl Support Group

“This ghost story is a perfect example of new wave horror that will also satisfy fans of classic Stephen King.” —Silvia Moreno-Garcia, author of The Daughter of Doctor Moreau and Mexican Gothic