We've Got to Try: How the Fight for Voting Rights Makes Everything Else Possible (Hardcover) 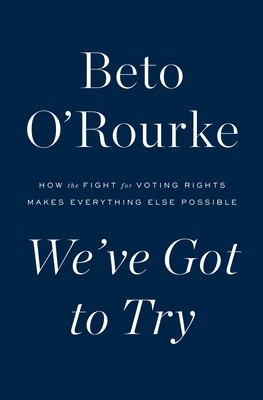 We've Got to Try: How the Fight for Voting Rights Makes Everything Else Possible (Hardcover)

“Uplifting. . . . O’Rourke gets an A-plus on both the moral frisson of the long fight and the rightness of the cause. . . . The happy warrior from Texas is inspiring.” --The Washington Post

Activist and political leader Beto O’Rourke blends history, sociology, and travelogue for a thrilling, inspiring case for how voting rights is essential to a productive and healthy democracy.

In We’ve Got To Try, O’Rourke shines a spotlight on the heroic life and work of Dr. Lawrence Aaron Nixon and the west Texas town where he made his stand. The son of an enslaved man, Nixon grew up in the Confederate stronghold of Marshall, Texas before moving to El Paso, becoming a civil rights leader, and helping to win one of the most significant civil and voting rights victories in American history: the defeat of the all-white primary. His fight for the ballot spanned 20 years and twice took him to the U.S. Supreme Court.

With heart, eloquence, and powerful storytelling, O’Rourke weaves together Nixon’s story with those of other great Texans who changed the course of voting rights and improved America’s democracy. While connecting voting rights and democracy to the major issues of our time, O’Rourke also shares what he saw, heard, and learned while on his own journey throughout the 254 counties of his home state. By telling the stories of those he met along the way and bringing us into the epicenter of the current fight against voter suppression, the former El Paso Congressman shows just how essential it is that the sacred right to vote is protected and that we each do our part to save our democracy for generations to come.

Beto O’Rourke is a fourth-generation Texan, born and raised in El Paso where he has served as a small business owner, a city council representative and a member of Congress. He founded and currently leads Powered by People, a Texas-based organization that works to expand democracy and produce Democratic victories through voter registration and direct voter engagement.

Beto is married to Amy O’Rourke and together they are raising Ulysses, Molly and Henry in El Paso’s historic Sunset Heights.