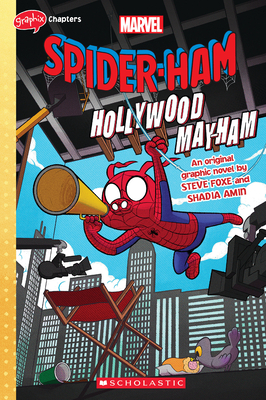 Legendary director Alfred Peacock has acquired the rights to bring Spider-Ham’s spectacular story to the silver screen. There’s only one, itsy-bitsy problem: Spider-Ham didn’t sell those rights, and Peacock is getting the origin all wrong—making our hero out to be a monstrous menace! Once he catches wind of the perilous production, Peter Porker uses his Daily Beagle connections to secure on-set credentials, where he not so subtly tries to improve the film’s depiction of his alter ego and fix all the “continuity errors” in the movie.

Behind the scenes, Porker soon discovers that some very shady characters are bankrolling the entire operation, in a bid to convince the residents of New Yolk City that their porcine protector is a threat who must be eliminated. Now, Spider-Ham must face down an army of ninja production assistants and some truly shoddy CGI to prevent this box-office bomb from blowing up his reputation! Will everyone's favorite pig clear his name? Or is this porky protector headed for the cutting room floor?

Shadia Amin is a Colombian comics artist currently living in the US. Her art aims to capture the fun of super heroes, fantasy, and life itself. Her works include BOOM!’s The Amazing World of Gumball: The Storm, and Oni-Lion Forge’s Aggretsuko, as well as collaborations on anthologies like Alloy from Ascend Comics and Votes for Women from Little Bird Press.

Steve Foxe is the author of more than fifty comics and children's books for properties including Pokémon, Batman, Transformers, Adventure Time, Steven Universe, and Grumpy Cat. He lives in Queens with his partner and their dog, who is named after a cartoon character. Find out more at stevefoxe.com.

“An amusing graphic novel for younger or reluctant readers and one that should have a lot of popular appeal on school or library shelves.” -- Kirkus

Praise for Great Power, No Responsibility

"Filled with color and energy... The cartoony art style and visual gags will keep even the most reluctant readers entertained." -- School Library Journal

“Fun and will get younger readers turning pages.” -- Kirkus

"A perfect pick for younger fans of Marvel's Spider-Verse." -- Booklist