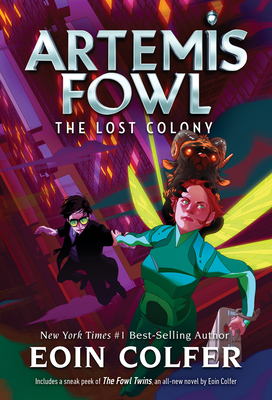 This is book number 5 in the Artemis Fowl series.

Until recently, Artemis Fowl was the only human to have discovered that magical beings do indeed exist.
But now a second juvenile genius wants to capture a demon for scientific study.
Only an ancient time spell separates the demons from humankind--and Artemis must prevent it from unraveling.
If he fails, the bloodthirsty tribe will relaunch their quest to wipe humans from the planet.
The internationally best-selling Artemis Fowl series inspired a movie now streaming on Disney+.
Eoin Colfer is the New York Times best-selling author of eight books in the Artemis Fowl series and well as Iron Man: The Gauntlet, the WARP trilogy, Airman, Half Moon Investigations, The Supernaturalist,Eoin Colfer's Legend of... books, The Wish List,Benny and Omar; and Benny and Babe. He lives in Dublin, Ireland with his wife and two sons.