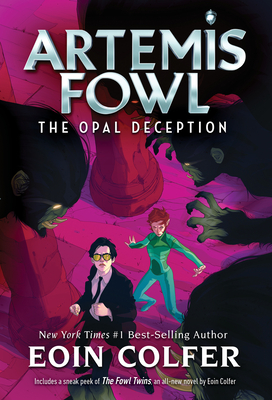 This is book number 4 in the Artemis Fowl series.

Artemis Fowl's memories of the fairy race have been wiped, and his one fairy ally, Captain Holly Short, is on the run.
He needs his memory back--and fast--because a power-crazed pixie is out for revenge, scheming to overthrow the Lower Elements Police.
With Holly gone, Artemis is depending on a flatulent dwarf. Things are about to explode. . .
The internationally best-selling Artemis Fowl series inspired a movie now streaming on Disney+.
Eoin Colfer is the New York Times best-selling author of eight books in the Artemis Fowl series and well as Iron Man: The Gauntlet, the WARP trilogy, Airman, Half Moon Investigations, The Supernaturalist,Eoin Colfer's Legend of... books, The Wish List,Benny and Omar; and Benny and Babe. He lives in Dublin, Ireland with his wife and two sons.