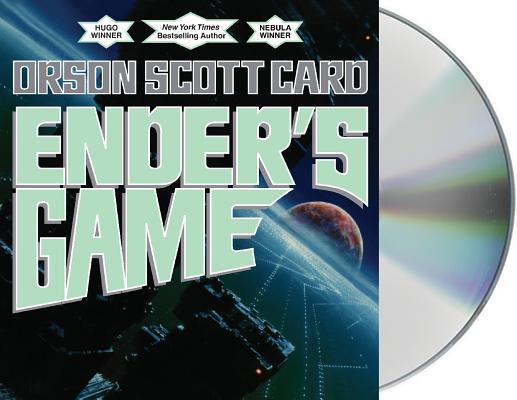 Email or call for price

The worldwide bestseller, Ender's Game by Orson Scott Card comes to the screen at last in a major motion picture event in November 2013. Starring Hugo's Asa Butterfield, Harrison Ford, and Ben Kingsley, the movie is sure to inspire a new audience of fans to read the book that started it all.

Once again, Earth is under attack. An alien species is poised for a final assault. The survival of humanity depends on a military genius who can defeat the aliens. But who?

Ender Wiggin. Brilliant. Ruthless. Cunning. A tactical and strategic master. And a child.

Recruited for military training by the world government, Ender's childhood ends the moment he enters his new home: Battle School. Among the elite recruits Ender proves himself to be a genius among geniuses. He excels in simulated war games. But is the pressure and loneliness taking its toll on Ender? Simulations are one thing. How will Ender perform in real combat conditions? After all, Battle School is just a game. Isn't it?

Stefan Rudnicki is an award winning audiobook narrator, director and producer. He was born in Poland and now resides in Studio City, California. He has narrated more than three hundred audiobooks and has participated in over a thousand as a writer, producer, or director. He is a recipient of multiple Audie Awards and AudioFile Earphones Awards as well as a Grammy Award, a Bram Stoker Award, and a Ray Bradbury Award. He received AudioFile’s award for 2008 Best Voice in Science Fiction and Fantasy. Along with a cast of other narrators, Rudnicki has read a number of Orson Scott Card's best-selling science fiction novels. He worked extensively with many other science fiction authors, including David Weber and Ben Bova. In reviewing the twentieth anniversary edition audiobook of Card’s Ender's Game, Publishers Weekly stated, "Rudnicki, with his lulling, sonorous voice, does a fine job articulating Ender's inner struggle between the kind, peaceful boy he wants to be and the savage, violent actions he is frequently forced to take." Rudnicki is also a stage actor and director.

Orson Scott Card is best known for his science fiction novel Ender's Game and its many sequels that expand the Ender Universe into the far future and the near past. Those books are organized into the Ender Quintet, the five books that chronicle the life of Ender Wiggin; the Shadow Series, which follows on the novel Ender's Shadow and are set on Earth; and the Formic Wars series, written with co-author Aaron Johnston, which tells of the terrible first contact between humans and the alien "Buggers." Card has been a working writer since the 1970s. Beginning with dozens of plays and musical comedies produced in the 1960s and 70s, Card's first published fiction appeared in 1977--the short story "Gert Fram" in the July issue of The Ensign, and the novelette version of "Ender's Game" in the August issue of Analog. The novel-length version of Ender's Game, published in 1984 and continuously in print since then, became the basis of the 2013 film, starring Asa Butterfield, Harrison Ford, Ben Kingsley, Hailee Steinfeld, Viola Davis, and Abigail Breslin.

Harlan Ellison (1934-2018) wrote or edited 75 books and more than 1700 stories, essays, articles, and newspaper columns as well as two dozen teleplays and a dozen motion pictures. He won the Hugo award nine times, the Nebula award four times, the Bram Stoker award six times (including The Lifetime Achievement Award in 1996), the Edgar Allan Poe Award of the Mystery Writers of America twice, the Georges Méliès fantasy film award twice, and was awarded the Silver Pen for Journalism by PEN, the international writer’s union.

“Superb! This is Card at the height of his very considerable powers--a major SF novel by any reasonable standard.” —Booklist

“An affecting novel full of surprises. Card never makes the mistake of patronizing or sentimentalizing his hero.” —The New York Times Book Review

“A pleasure to listen to. Refreshing, highly entertaining and fast-paced. Orson Scott Card is a phenomenal writer.” —USA TODAY