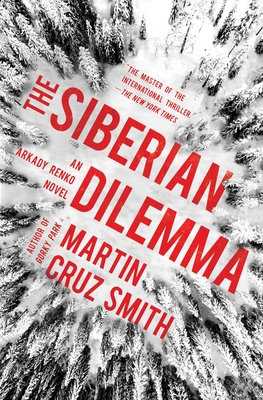 This is book number 9 in the The Arkady Renko Novels series.

From the award-winning, bestselling author of Gorky Park and Tatiana comes a breathtaking new novel about investigator Arkady Renko—“one of the most compelling figures in modern fiction” (USA TODAY)—who travels deep into Siberia to find missing journalist Tatiana Petrovna.

Journalist Tatiana Petrovna is on the move. Arkady Renko, iconic Moscow investigator and Tatiana’s part-time lover, hasn’t seen her since she left on assignment over a month ago. When she doesn’t arrive on her scheduled train, he’s positive something is wrong. No one else thinks Renko should be worried—Tatiana is known to disappear during deep assignments—but he knows her enemies all too well and the criminal lengths they’ll go to keep her quiet.

Renko embarks on a dangerous journey to find Tatiana and bring her back. From the banks of Lake Baikal to rundown Chita, Renko slowly learns that Tatiana has been profiling the rise of political dissident Mikhail Kuznetsov, a golden boy of modern oil wealth and the first to pose a true threat to Putin’s rule in over a decade. Though Kuznetsov seems like the perfect candidate to take on the corruption in Russian politics, his reputation becomes clouded when Boris Benz, his business partner and best friend, turns up dead. In a land of shamans and brutally cold nights, oligarchs wealthy on northern oil, and sea monsters that are said to prowl the deepest lake in the world, Renko needs all his wits about him to get Tatiana out alive.

The Washington Post has said “Martin Cruz Smith is that rare phenomenon: a popular and well-regarded crime novelist who is also a writer of real distinction.” In the latest continuation of his unforgettable series, he brings us to the inside world of shadowy political figures and big wig oil oligarchs providing us with an authentic view of contemporary Russia, infused with his trademark wit.
Martin Cruz Smith’s novels include Gorky Park, Stallion Gate, Nightwing, Polar Star, Stalin’s Ghost, Rose, December 6, Tatiana, The Girl from Venice, and The Siberian Dilemma. He is a two-time winner of the Hammett Prize, a recipient of the Mystery Writers of America’s Grand Master Award and Britain’s Golden Dagger Award, and a winner of the Premio Piemonte Giallo Internazionale. He lives in California.
“Smith’s lucid prose, surprising imagery and realistic dialogue, as well as his wonderfully quirky characters, all serve his engrossing storytelling. But in the end what linger in your mind are the voices — of people who never knew they had so much to say and never dreamed their voices mattered.”

“This is Smith at his absolute best: black humor, brown bears, and gray souls.”

“[A] must for any crime fiction fan interested in the underside of Putin’s Russia.”

“Everything just feels Russian, as though the author hikes to his hut from the taiga, warms his frozen fingers at the wood stove, pours himself a vodka, and sits down to type. This is vintage Martin Cruz Smith. Fans of Arkady Renko will be pleased.”

"The master of the international thrillier."

"A huge inspiration for me."

"Renko is one of the most compelling figures in modern fiction."

"Along with icons like Sherlock Holmes, Philip Marlowe, and Sam Spade, Arkady Renko has become one of the finest fictional detectives to prowl the literary landscape."

"What ultimately sets the Renko books apart is the careful writing, and, more important, the knowledge of the human heart."

"A continuing adventure that in terms of popular fiction is surely a work of art."