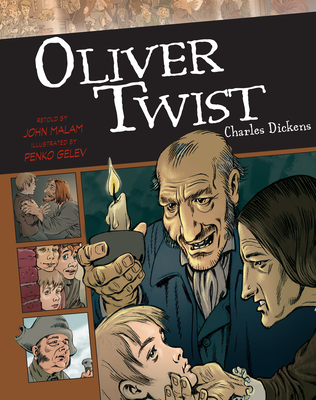 This is book number 11 in the Graphic Classics series.

Enjoy Charles Dickens's classic novel of a young orphan boy in a colorful graphic edition. Abridged for fast-paced reading, this book features illustrations that vividly tell the tale. Orphaned as soon as he is born, Oliver Twist miraculously survives years of neglect, hunger, and violence. Then, on his eighth birthday, he's taken to the workhouse . . . where his troubles are really about to begin. Will someone ever rescue him?
The iconic and much-loved Charles Dickens was born in 1812 in Portsmouth, though he spent much of his life in Kent and London. A prolific writer, Dickens kept up a career in journalism as well as writing short stories and novels, with much of his work being serialised before being published as books. He gave a view of contemporary England with a strong sense of realism, yet instilled his stories with a sense of charm, fantastic characters and humour like no other. He continued to work himself hard up until his death in 1870, leaving 'The Mystery of Edwin Drood' unfinished. Judith John (glossary) is a writer and editor specializing in literature and history. A former secondary school English Language and Literature teacher, she has subsequently worked as an editor on major educational projects, including English A: Literature for the Pearson International Baccalaureate series. Judith's major research interests include Romantic and Gothic literature, and Renaissance drama.