LEGO Star Wars: The Dark Side: Uncover the Secrets of the Sith (Mixed media product) 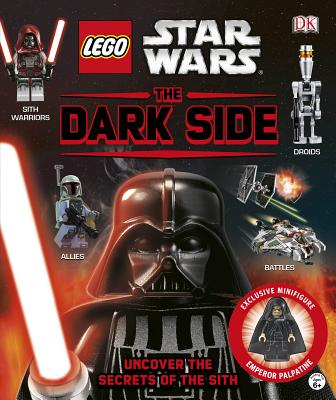 LEGO Star Wars: The Dark Side: Uncover the Secrets of the Sith (Mixed media product)


On Our Shelves Now
Journey to the dark side of a galaxy far, far away and meet the LEGO® Star Wars minifigure members of the ruthless Imperial Army in LEGO Star Wars: The Dark Side!

Witness Darth Vader battling Obi-Wan Kenobi and Luke Skywalker, meet the Sith and all of Darth Vader's minifigure subjects, and explore the Death Star and all of the Sith starships. Turn the pages to find facts and information about your favorite LEGO Star Wars minifigures and vehicles from the dark side in action-packed situations and discover everything there is to know about the legendary Darth Vader.

With new and exciting photography and an evil exclusive minifigure, LEGO Star Wars: The Dark Side will have you questioning on which side your allegiances lie.

Daniel Lipkowitz is a senior writer and story developer at the LEGO Group. His writing has appeared in LEGO Club Magazine as well as LEGO Master Builder Academy, and his characters and storylines regularly appear in new LEGO themes and animated LEGO films. He is the author of The LEGO Ideas Book, LEGO Awesome ideas, and Lego Play Book: Ideas to Bring Your Bricks to Life.
"[This book] deserves a place on any LEGO fan's bookshelf." – The Brick Life