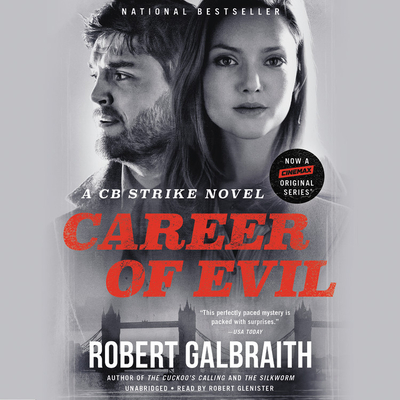 A disturbing package leads Detective Cormoran Strike and his assistant Robin Ellacott to investigate four dangerous murder suspects in this "magnetic" British mystery (Michiko Kakutani, The New York Times).
When Robin Ellacott opens an unexpected delivery, she is horrified to discover that it contains a woman's severed leg.
Her boss, private detective Cormoran Strike, is less surprised but just as alarmed. He suspects that four people from his past could be responsible -- and any one of them is capable of sustained and unspeakable brutality.
With the police focusing on the one suspect Strike has essentially ruled out, he and Robin take matters into their own hands and delve into the dark and twisted worlds of the other three men. But as more horrendous acts occur, time is running out for the two of them . . .
Career of Evil is the third in J. K. Rowling's highly acclaimed series featuring private detective Cormoran Strike and his assistant Robin Ellacott. A fiendishly clever mystery with unexpected twists around every corner, Career of Evil is also a gripping story of a man and a woman at a crossroads in their personal and professional lives.
Robert Galbraith is a pseudonym for J.K. Rowling, bestselling author of the Harry Potter series and The Casual Vacancy. Career of Evil is the third book in the highly acclaimed Cormoran Strike crime fiction series. The Cuckoo's Calling was published in 2013 and The Silkworm in 2014.
"Career of Evil is the third--and best--novel in the engaging Cormoran Strike private detective series. . . . [Galbraith has] invented a serial killer for the ages, one who chills us from the book's grim but riveting opening. . . . This perfectly paced mystery is packed with surprises, all of which play out with flawless crime-fiction logic."—Jocelyn McClurg, USA Today (4/4 stars)

"Pure pleasure. . . . That's what makes these novels so good: They are clever, tightly plotted mysteries with all of the most pleasurable elements of the genre (good guy, bad guy, clues, twists, murder!), but with stunning emotional and moral shading."—Annalisa Quinn, NPR

"Hugely entertaining . . . This gifted storyteller has taken full command of the new turf. . . . Career of Evil succeeds powerfully on its own terms."—Lloyd Sachs, Chicago Tribune

"Strike and Robin are just as magnetic as ever."—Michiko Kakutani, New York Times

"Another triumph . . . Its darkness is mitigated by its sparkling protagonists."—Kim Hubbard, People