Wrath of the Dragon King: A Fablehaven Adventure (Dragonwatch #2) (Paperback) 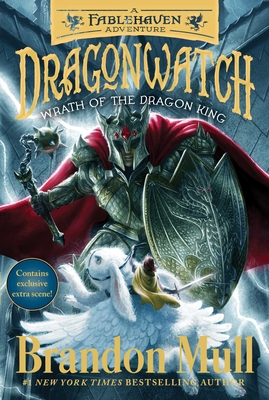 Wrath of the Dragon King: A Fablehaven Adventure (Dragonwatch #2) (Paperback)

This is book number 2 in the Dragonwatch series.

Kendra and Seth race to claim a talisman that could help them in their quest to protect the world from total dragon domination in this second novel of the New York Times bestselling sequel series to Fablehaven from author Brandon Mull.

War has come to the dragon sanctuaries of the world, and the danger is most intense at Wyrmroost. After a humiliating defeat at the hands of Kendra and Seth, Celebrant, King of Dragons, prepares to unleash his fury and take control of his native preserve. Armed with information from a new ally—Ronodin, the dark unicorn—Celebrant seeks a legendary talisman—the dominion stone.

However, the powerful stone is protected by a cursed castle. Upon entering the castle fortress, an unyielding power strips all magical beings of their power and forces Celebrant to take his human avatar form. Kendra and Seth must enter the cursed castle as well. The race is on. Will the two young caretakers rally enough support from the creatures of Wyrmroost against the greatest threat the magical community has faced in ages? Can they foil Celebrant’s plan and beat him to the mighty dominion stone? Or will all hope be shattered by the wrath of the Dragon King?
Brandon Mull is the author of the New York Times, USA TODAY, and Wall Street Journal bestselling Beyonders and Fablehaven series, as well as the bestselling Five Kingdoms, Candy Shop Wars, and Dragonwatch series. He resides in Utah, in a happy little valley near the mouth of a canyon. Brandon’s greatest regret is that he has but one life to give for Gondor.