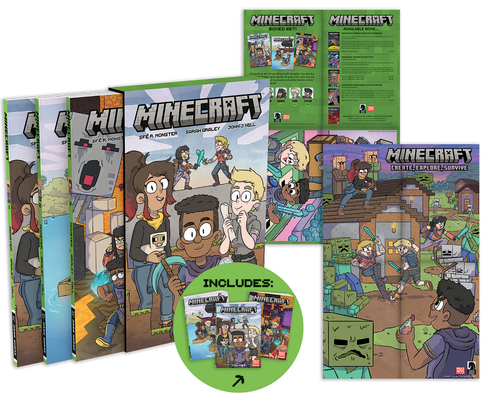 
Coming Soon - Available for Pre-Order Now
Collecting all three volumes of the first graphic novel set in the world of Minecraft, plus an exclusive Minecraft poster by Sarah Graley!

Tyler’s life is turned upside down when his family has to move far away from his hometown. Thankfully, he has a strong group of friends forever linked in the world of Minecraft!

Tyler, Evan, Candace, Tobi, and Grace spend their days going on countless adventures together in the expansive block world, always on the lookout for a new challenge. Along the way monsters, pirates, bullies, and the dangers of the Nether will push them to the breaking point. But together, there’s nothing these friends can’t overcome!

Sfé is a queer Canadian comic artist living divided between the east coast (Halifax) and west coast (Vancouver) of Canada.

Sfé writes, draws, scripts and designs characters, comics, and stories for both personal and collaborative purposes. Some of Sfé's projects include Eth's Skin (a genderqueer webcomic about mermaids, selkies and sea monsters living on the west coast of British Columbia), and The Beyond Anthology (a queer sci-fi/fantasy comic anthology), as well as other comics like Kyle & Atticus, and Seven Stories From The Sea.

Sfé's work focuses on gender, queerness, genderqueerness, and a strong sense of all things Canadian. Sfé is a hockey fan, a monster enthusiast, and plays a mean game of Tetris.