Go-La'-ka Wa-Wal-sh (Raven Speaks): A collection of articles about the culture and history of the Colville Confederated Tribes (Paperback) 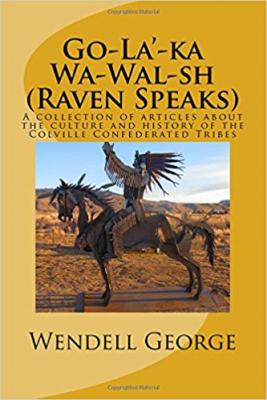 Go-La'-ka Wa-Wal-sh (Raven Speaks): A collection of articles about the culture and history of the Colville Confederated Tribes (Paperback)


Usually Ships in 1-5 Days
(This book cannot be returned.)
This is my third book about the culture and history of the Colville Confederated Tribes. The intent is to continue publishing stories about the tribes. However, this book is unique because it isn't merely dates and a list of major events; instead it offers more of an in-depth discussion of the Indian Way. It applies the basic Indian philosophy to today's fast moving events with an eye on how to cope with our problems. These subjects are all tied together with a summary of what Indian culture has become over many generations. It is the accumulation of thoughtful considerations on how life has evolved. Since most tribes didn't have a written language these thoughts were handed down orally through animal stories of which the mythical Coyote was the most popular. Many Indian stories used animals to demonstrate the various concepts. Certain animals personified unique traits such as Group Spirit for the Eagle. The Eagle has become a powerful spiritual symbol for everyone in the United States. Included are such topics as the effect of the loss of salmon on our tribal members; how Indian people are invisible but not vanishing; the forced movement to the Reservation; what it means to be the First American; Indian Self-Determination; the mysteries of the Medicine Wheel; special respect Indians have for grave sites; and various philosophical topics such as balancing your Ego; Spirit Chief and the Mind; the concept of Indian time; how to perceive the world; real meaningful education using the Indian Way; Green, the healing color; our tie to nature through the Animal World and the Indian ten commandments. The material is presented in more of a random manner rather than in a logical text book approach. In fact, that issue is addressed in the July 15, 2014 article "Little Joe learns another way to perceive the world". The stories about Little Joe are the way I wound up presenting various aspects of the Indian Way. Little Joe is an Indian boy who was adopted out because his parents passed away and he had no other family. This is a typical story of many Indian families. Little Joe found out he was Indian and wanted to learn more about tribal history and culture so he came under the wing of a tribal elder he called Uncle or Twasen in the Salish language. Respected Elders in his tribe were called Aunt or Uncle. It is a continuing story with no conceivable end. The book concludes with a little background of the author and his family.
Wendell George now lives in Omak, Washington a small western town which borders the Colville Indian Reservation (Rez) and is famous for the Omak Stampede and Indian Suicide Race. He grew up on the Rez and he and his family have a long history of helping their tribe through some tumultuous times. His great grandfather was Chief Chilcosahaskt of the Entiat tribe. His grandfather was Lahompt (Chief Koxit George). His Dad, Moses, was a member of the first Colville Business Council in 1938. He served on the Council in 1986-90 and was CEO of the Tribal Enterprises Corporation in 1996-98. Before moving back to the Rez he spent fifteen years with Boeing as an Electronics Engineer after graduating from Washington State University. The highlight was helping land a man on the moon on July 20, 1969. It was prophetic when his dad said on January 2, 1968 that his great-grandfather's name meant "grabbing or reaching for the sky". Until retiring he operated a cattle ranch in Kartar Valley. He and his wife, Barbara, have had six children and six grandchildren. He has served on the Wenatchee Valley College, Paschal Sherman Indian School, and Omak School boards. He has an intense interest in education and passed it on to his family who all have college degrees or are working towards it. He has written two books; Last Chief Standing and Coyote Finishes the People. This book is a compilation of the thirty-two articles he wrote for the Wenatchee World newspaper.