Attack of the Killer Bunnies: An Unofficial Graphic Novel for Minecrafters (The Glitch Force #1) (Paperback) 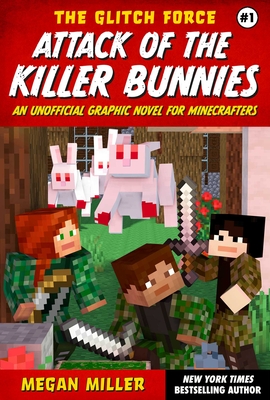 Attack of the Killer Bunnies: An Unofficial Graphic Novel for Minecrafters (The Glitch Force #1) (Paperback)

This is book number 1 in the The Glitch Force series.

The Glitch is an elite task force sent in to eliminate a terrifying creature invasion in the dark forest. Never having visited the dark forest before, its members find themselves in a dangerous woodland mansion with evokers and pillagers lurking everywhere. Then there are the unhinged forest villagers to contend with! A full-scale battle ensues, and the team must risk their lives and enlist a team of unreliable but deadly mobs to help them destroy a deceptively adorable threat: an army of killer bunnies with glowing red eyes and an appetite for disaster.
Megan Miller was born in Talara, Peru, and from there grew up in Miami, Barcelona, and the suburbs of London, England. She's also lived in Houston, Austin, NYC, the Hudson Valley, Kentucky, and finally New Mexico. She plays Minecraft daily, and has also spent many hours in the past with arcade game Centipede, the first Castle Wolfenstein shooters, the first color Mac space shooter Crystal Quest, The Sims, Sim City (1-3), City Skylines, Civilization, and more. You can contact her through her website, meganfmiller.com - (see you there!)