Former Guy: Doonesbury in the Time of Trumpism (Paperback) 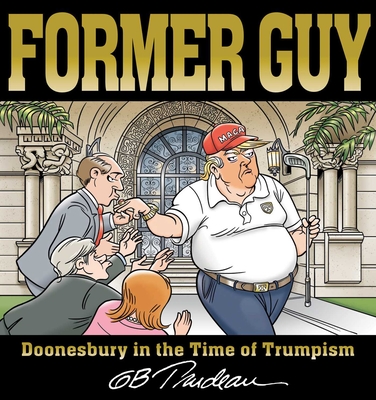 Former Guy: Doonesbury in the Time of Trumpism (Paperback)

The continuation of Pulitizer Prize-winning cartoonist G.B. Trudeau's bestselling Trump series, this fourth (and final?) volume chronicles Doonesbury in the time of Trumpism.

Though the title doesn't mention him by name, Former Guy looms large in American politics and culture even after leaving the Executive Office of the President. This latest Doonesbury collection picks up in the heat of the 2020 presidential campaign, chronicles the infamy of the Jan. 6 Capitol riot, and continues into the next administration, the ongoing COVID-19 crisis, and the many manifestations of Trumpism in global politics and American life.

Over 50 years into his legendary career, Pulitzer Prize-winning cartoonist G.B. Trudeau is still the most accomplished satirist in comics, and his ongoing comics coverage of Donald Trump are unparalleled in breadth and humor.
G. B. Trudeau has been drawing his Pulitzer Prize-winning comic strip for more than forty years. In addition to cartooning, Trudeau has worked in theater, film, and television. He also has been a contributing columnist for the New York Times op-ed page and later an essayist for Time magazine. He is a fellow of the American Academy of Arts & Sciences. He lives in New York City with his wife, Jane Pauley. They have three grown children.