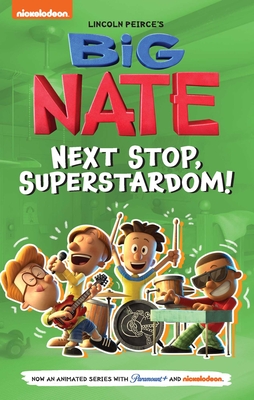 This is book number 3 in the Big Nate TV Series Graphic Novel series.

Big Nate and his friends in the 6th-grade supergroup "Fear The Mollusk" are destined for stardom! That is, if they can do something about the screechy, ear-splitting vocals of their lead singer, Nate Wright. Being frontman has always been central to Nate's identity, but he might have to swallow his ego if he wants his friends to shine on stage. In "The Curse of the Applewhites," Nate helps his friend Chad break an ancient family hex through the fine art of figureskating. And in "The Ghostly Coven of Man Witches," Nate, Dee Dee, Teddy, Francis, and Gina explore the haunted hallways of P.S. 38 to get to uncover a sinister mystery—and postpone a pesky test. This original graphic novel adaptation of the hit Paramount+ and Nickelodeon animated series includes stories and artwork from three different episodes. With Nate Wright and friends, readers are always in for a rocking good time!
Lincoln Peirce has been drawing the Big Nate comic strip for more than 20 years. Born in Ames, Iowa, Peirce grew up in Durham, New Hampshire. As a kid, he began creating his own strips in the sixth grade. Peirce taught high school in New York City and has created several animated pilots for Cartoon Network and Nickelodeon. He lives in Portland, Maine, with his family.