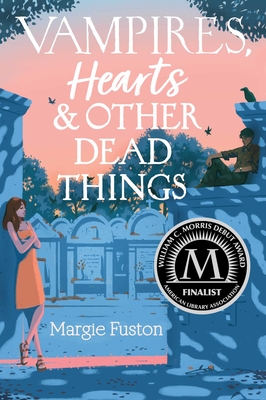 
On Our Shelves Now
An ALA Morris Award Finalist​!

In this “equal parts heartbreaking and joyful” (School Library Journal) debut YA novel that’s The Coldest Girl in Coldtown meets They Both Die at the End, a teen girl takes a trip to New Orleans with her estranged best friend to find a vampire to save her dying father.

Victoria and her dad have shared a love of the undead since the first vampire revealed his existence on live TV. Public fear soon drove the vampires back into hiding, yet Victoria and her father still dream about finding a vampire together. But when her dad is diagnosed with terminal cancer, it’s clear that’s not going to happen. Instead, Victoria vows to find a vampire herself—so that she can become one and then save her father.

Armed with research, speculations, and desperation—and helped by her estranged best friend, Henry—Victoria travels to New Orleans in search of a miracle. There she meets Nicholas, a mysterious young man who might give her what she desires. But first, he needs Victoria to prove she loves life enough to live forever.

She agrees to complete a series of challenges, from scarfing sugar-drenched beignets to singing with a jazz band, all to show she has what it takes to be immortal. But truly living while her father is dying feels like a betrayal. Victoria must figure out how to experience joy and grief at once, trusting all the while that Nicholas will hold up his end of the bargain…because the alternative is too impossible to imagine.
Margie Fuston grew up in the woods of California where she made up fantasy worlds that always involved unicorns. In college, she earned undergraduate degrees in business and literature and a master’s in creative writing. Now she’s back in the woods and spends all her time wrangling a herd of cats and helping her nephews hunt ghosts, pond monsters, and mermaids.